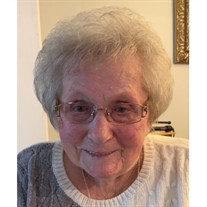 INDIANAPOLIS &#8211; Ruth Mae (Clark) Herald, age 96, of Indianapolis, passed away on Tuesday, September 10, 2019 at her home with loved ones by her side. She was born in Indianapolis on January 14, 1923 to Leonard C. Clark and Myrtle Lucille... View Obituary & Service Information

The family of Ruth Mae Herald created this Life Tributes page to make it easy to share your memories.