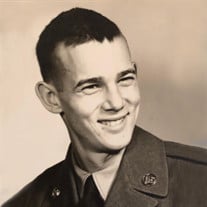 FORTVILLE – Russel L. Edwards, Sr., age 87, of Fortville, passed away Saturday, June 8, 2019 at Community North Hospital. He was born in Marion County on June 5, 1932 to Donald Conway and Dora Cathern (Hawkins) Edwards. Russel served in the U.S. Army as a Private 1st Class with Company B 14th Infantry during the Korean War. He was awarded the National Service Medal, National Defense Service Medal, and Korean Service Ribbon. He worked for Delco Remy in Anderson as an assembler for 43 years before retiring in 1995. Russel was a member of UAW and Fortville American Legion Post 391. In his younger years, he liked playing basketball and also enjoyed watching IU Basketball and gardening. Russel is survived by his children, Russel L. (Brinda) Edwards, Jr. of Alexandria, Louisiana and Penny (Jerry) Brawner of Fortville; lifelong companion, Nila Cain of Fortville; several grandchildren, great-grandchildren, and great great-grandchildren; and sister, Helen Forney of Pendleton. He was preceded in death by his parents, Donald and Dora Edwards; brother, Robert Edwards; and sister, Naomi Edwards. Visitation will be held on Wednesday, June 12, 2019, from 3:00 p.m. until 7:00 p.m. at Erlewein Mortuary & Crematory, 124 E. Staat Street, Fortville, IN 46040. A funeral service will be held on Thursday, June 13, 2019, at 11:00 a.m. at the mortuary. Chaplain Worth Hartman will be officiating. Burial will follow at Gravel Lawn Cemetery in Fortville with military honors by the Greenfield Veterans Honor Guard. Memorial contributions may be made by mail to the Fortville American Legion Post 391, PO Box 206, Fortville, IN 46040 or VFW Post 6904 – Fortville, 206 S. Main Street, Fortville, IN 46040. Envelopes will be available at the mortuary. Friends may share a memory or condolence at www.erleweinmortuary.com.

The family of Russel L. Edwards Sr. created this Life Tributes page to make it easy to share your memories.