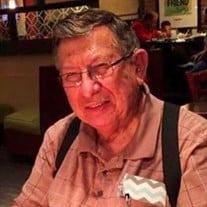 NEW PALESTINE – Roy “Thomas” Rader, age 80, of New Palestine, passed away on Thursday, May 16, 2019 at Golden Living Center – Brandywine. He was born in Indianapolis on May 1, 1939 to John Rader and Martha A. (Gummere) Poppaw. He graduated from Thomas Carr Howe High School in 1957 and received his Associate’s in statistics from IUPUI. Tom married Mary “Rosalie” (Andrews) on June 19, 1960 in Indianapolis. In high school Tom worked for a local bakery near his home where he learned to decorate cakes, make donuts and funnel cakes and lots of other goodies. He also worked as a meter reader and eventually gained employment at Indiana Gear Works, part of The Buehler Corporation as an engineer in the 60’s and early 70’s. He then worked for International Harvester – Navistar as a processing engineer for over 20 years retiring in 1991. Tom most recently worked for Global Gear in Illinois. He was a member of Calvary Baptist Church in Indianapolis. He was very involved in his church where he taught SS, worked with the youth, served on the building committee for their move to the east side of Indianapolis in the early 70’s, mowed grass and served in several leadership roles among many other ministry opportunities. He was an Eagle Scout and participated in Indian Guides. Tom liked fishing, boating, golfing, and bowling. He also loved to travel and going on family vacations every summer to Florida and The Smoky Mountains and just spending time with his family. Tom is survived by his children, Keith (Michele) Rader of Wanamaker, Beth (Brian) Burkhardt of Greenfield, and Scott (Theresa) Rader of Indianapolis; son-in-law, John Gilliland of Fishers; 14 grandchildren and a growing number of great-grandchildren; and four siblings, Mary Lou (Jim) Dower of Frostproof, Florida, Kay (Chuck) Harsin of Cumberland, Indiana, Jerry Rader of Greenfield, and Patty Eckert of Greenville, North Carolina. He was preceded in death by his parents; wife; daughter, Amy Lynne Gilliland; and an infant brother. Visitation will be held on Thursday, May 23, 2019, from 1:00 p.m. until 4:00 p.m. at Erlewein Mortuary & Crematory, 1484 W. US Hwy. 40, Greenfield, IN 46140. A funeral service will take place immediately following the visitation at 4:00 p.m. A private burial will be held at a later date at Washington Park East Cemetery in Indianapolis. Memorial contributions may be made by mail to Calvary Baptist Church, 3255 N German Church Rd, Indianapolis, IN 46235 or American Heart Association, 208 S. LaSalle St., Suite 1500, Chicago, IL 60604. Envelopes will be available at the mortuary. Friends may share a memory or a condolence at www.erleweinmortuary.com.

The family of Roy "Thomas" Rader created this Life Tributes page to make it easy to share your memories.