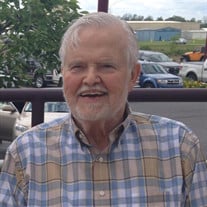 GREENFIELD – Ross Clark McMahan, age 82, attorney, of Greenfield, passed away on Saturday, April 13, 2019 at IU Health Methodist. He was born in Muncie on November 24, 1936 to George and M. Olivia (Clark) McMahan. He graduated from Burris Laboratory School in 1954. He received his bachelors from Ball State University in 1958 and earned his doctorate in law from IU School of Law. Ross married Sally Ann (Hirschy) on August 26, 1958 in Fort Wayne. He was a self-employed attorney in Indianapolis for 49 years before retiring in 2015. He was a member of the Marion County Bar Association and 20 year member of the Buck Creek Township Fire Department, where he was chief from 1990-1996. Ross was also a member of the laborers union #1112 in Muncie and a member of the Masonic Lodge and Scottish Rite. He enjoyed traveling, primarily in Europe, where he enjoyed the history and to China in 2012. Ross liked reading and history. Ross had a wonderful sense of humor and enjoyed a good joke. He most of all loved his grandchildren. Ross is survived by his wife, Sally McMahan of Greenfield; children, Michael (Angela Cooper) McMahan of Greenfield and Judith (Scott) Workman of Westfield; four grandchildren, Alexis M. McMahan, Chelsi M. McMahan, Noah A. Workman, and Seth G. Workman; and a sister, Molly McMahan. He was preceded in death by his parents, George and Olivia McMahan. Visitation will be held on Wednesday, April 17, 2109, from 3:00 p.m. until 5:00 p.m. at Buck Creek Township Fire Department, 5809 W. Airport Blvd., Greenfield, IN 46140. A funeral service will take place immediately following the visitation at 5:00 p.m. Jeri Barrett-Thomas will be officiating. A graveside committal will be held on Thursday, April 18, 2019, at 2:00 p.m. at Lindenwood Cemetery in Fort Wayne. In lieu of flowers, memorial contributions may be made by mail to the Buck Creek Township Fire Department, 5809 W. Airport Blvd., Greenfield, IN 46140 or envelopes will be available at the fire department. Friends may share a memory or a condolence at www.erleweinmortuary.com. Arrangements are being handled by Erlewein Mortuary & Crematory in Greenfield.

GREENFIELD &#8211; Ross Clark McMahan, age 82, attorney, of Greenfield, passed away on Saturday, April 13, 2019 at IU Health Methodist. He was born in Muncie on November 24, 1936 to George and M. Olivia (Clark) McMahan. He graduated from Burris... View Obituary & Service Information

The family of Ross Clark McMahan created this Life Tributes page to make it easy to share your memories.