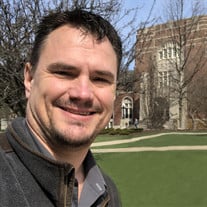 FISHERS – Roscoe “Rocky” Murray, age 49, of Fishers, passed away unexpectedly on Monday, April 9, 2018. He was born on October 18, 1968 in Indianapolis as the son of Kenneth W. Murray and Leona (McLain) Norrod. Rocky received his bachelors degree from Gallaudet University in Washington D.C. in 1993 and his masters degree in 1998 from McDaniel College in Westminster, MD. Rocky married Bobbi Sue (Renfrew) on August 30, 1997 in Frederick, MD. He was currently the American Sign Language teacher at Anderson High School and had also worked for the Indiana School for the Deaf as a math teacher. Rocky was the co-sponsor for the sign language club at Anderson High School. He enjoyed doing projects around the house, hiking, traveling, and watching his children play in sports. Rocky adored his family and loved spending time with them. Rocky is survived by his wife, Bobbi Sue Murray of Fishers; children, Ashley (Gabriel) Wright of Fortville, Ashton Murray of Fishers, Ashlanna Murray of Fishers, and Asher Murray of Fishers; father, Kenneth Murray of Indianapolis; mother and step-father, Leona and Ernie Norrod of Indianapolis; sisters, Brenda (Timothy) Wade of Doylestown, PA, Shawn Murray of Indianapolis, and Lilly (Zachary) Richardson of Bargersville, IN; and step-sister, Heidi (David) Stegall of Albany, IN. He was preceded in death by his grandmother, Dolletta McLain. Visitation will be held on Friday, April 13, 2018, from 10:00 a.m. until 1:00 p.m. at Brandywine Community Church, 1551 E. New Road, Greenfield, IN 46140. A celebration of Rocky’s life will take place following the visitation at 1:00 p.m. Pastor Mark Wright will be officiating. A Go Fund Me page has been established for the family and if you would like to donate you can do so at https://www.gofundme.com/e2yztf-rocky-murray-memorial-fund. Friends may share a memory or a condolence at www.erleweinmortuary.com. Arrangements are being handled by Erlewein Mortuary & Crematory in Greenfield.

The family of Roscoe "Rocky" Murray created this Life Tributes page to make it easy to share your memories.