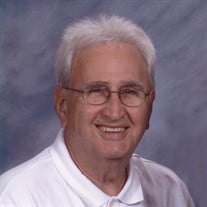 GREENFIELD – Ronald “Ronnie” L. Young, age 85, of Greenfield, passed away Tuesday, November 2, 2021. He was born in Charlottesville, Indiana on June 8, 1936 to Gerald “Ed” Young and Emogene A. Young. He graduated from Charlottesville High School in 1954 and was a veteran of the U.S Army. On June 25, 1959, he married Sondra Sullivan in Greenfield. Before retiring in 1996, he worked at Ford Motor Company as a machinist for 35 years. He was a member of Trinity Park United Methodist Church in Greenfield and the UAW. Ronnie was a former member of the Greenfield Masonic Lodge and American legion Post #119. He enjoyed his yard work, traveling, watching Purdue Basketball and attending his grandchildren’s sporting events. Ronnie is survived by his loving wife, Sondra Young of Greenfield; son, Craig Young of Nashville, TN; daughter, Ronda Woldmoe (Mark) of Fishers; grandchildren, Jordan Courtney (Joe), Cate Young, Austin Woldmoe (Sarah) and Alex Woldmoe (Molly); great-grandchildren, Macey and Marlee; and brother, Gerry Young (Peggy) of Georgia. He was preceded in death by his parents, Ed and Emogene Young. Visitation will be held on Monday, November 8, 2021, from 11:00 a.m. until 1:00 p.m. at Erlewein Mortuary & Crematory, 1484 W. US Hwy. 40, Greenfield, IN 46140. A funeral service will begin at 1:00 p.m., with Mike Manning officiating. Burial will follow at McCray Cemetery in Wilkinson. In lieu of flowers, memorial contributions may be made by mail to the American Cancer Society, PO Box 22478, Oklahoma City, OK 73123, by website at donate3.cancer.org or to the Parkinson’s Foundation, 1359 Broadway, Suite 1509, New York, NY 10018, by website at https://secure3.convio.net/ or envelopes will be available at the mortuary. Friends may share a memory or condolence at www.erleweinmortuary.com.

The family of Ronald "Ronnie" Young created this Life Tributes page to make it easy to share your memories.