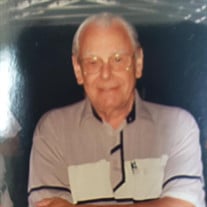 DANVILLE - Ronald Leon Mears was born July 5, 1935, in Indianapolis, to Fern (Lane) Mears and Abner Mears. He had 4 siblings Dorothy, Donald, Gareth and Shirley all of whom are deceased. Ron grew up on his father’s farm in Hendricks County and attended Avon school system, from where he graduated in 1953. At Avon High, he met and married on February 13, 1954 the one true and only love of his life Clara Ann Bowles, who preceded him in death on January 7, 2004. Ron and Clara purchased a 70-acre farm in Danville and built their present residence, where he passed away on February 5, 2022. Ron and Clara started a tool and die machining business in the garage of their home on 200 N. in 1966. As the business grew, they built a building in 1987 on Rockville Road in Avon, Indiana. This business is still in operation today and is currently owned and operated by their son, Roger. Ron was a member of Kingsway Christian Church and loved sharing his faith and the gospel of the Lord Jesus Christ. Ron was a very active member of the Avon Alumni for several years acting in many capacities, including President and Vice President of the Alumni Association. Ron enjoyed working on the farm and always loved being with family and friends. Ron is survived by a daughter, Cella L. (Mears) (Dan) Carlisle, Danville, IN; sons, Roger Mears (Rose) of Avon, IN and Jeff Mears (Monette) of Danville, IN; 11 grandchildren; and 3 great-grandchildren. Visitation will be held on Wednesday, February 9, 2022, from 10:00 a.m. until 2:00 p.m. at Conkle Funeral Home, 76 Avon Ave, Avon, IN 46123. A funeral service will begin at 2:00 p.m. Burial will follow at West Ridge Park Cemetery in Indianapolis. Arrangements are being handled by Erlewein Mortuary & Crematory in Greenfield. Friends may share a memory or condolence at www.erleweinmortuary.com.

DANVILLE - Ronald Leon Mears was born July 5, 1935, in Indianapolis, to Fern (Lane) Mears and Abner Mears. He had 4 siblings Dorothy, Donald, Gareth and Shirley all of whom are deceased. Ron grew up on his father&#8217;s farm in Hendricks County... View Obituary & Service Information

The family of Ronald " Ron " Mears created this Life Tributes page to make it easy to share your memories.