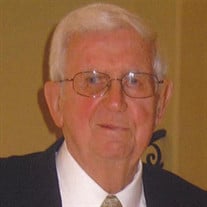 FISHERS - Ronald Edward Ploetz, was born in Milwaukee, Wisconsin on March 6, 1930 to Adeline Ploetz (nee Hoffman) and William Robert Ploetz. He moved to New London, Wisconsin in 1933, and in 1936 to Coloma, Wisconsin, the birthplace of his father and mother. William was the oldest of 15 children of Frank William and Bertha Ploetz (11 boys and four girls), and Adeline (Lena) was one of eight children (four girls and four boys). Ron returned to Milwaukee in 1942. He graduated from Boy’s Technical High School in June 1948 after illustrious stints as a baseball player (he was the winning pitcher in the inaugural Wisconsin state high school championship game) and the center on the basketball team. While in high school he specialized in the electrical trade, his future vocation. Shortly after graduating he signed a major league contract with the Chicago White Sox. He played for 5 years in the farm systems of the White Sox and later the New York Giants; he ended his career in AA. Ron was a 6’4” left-handed pitcher who was affectionately called “Big Lefty” by teammates and friends. On June 3, 1950, Ron married his beloved high school sweetheart Nancy Ellen Albus in Superior, Wisconsin. They recently celebrated 72 years of marriage together. Ron is survived by his wife Nancy, their four children and families, Randy Christopher Ploetz (b 1952)/Michelle Lanea Ploetz (nee Riddle) and family Jill Nicole Ploetz, Kelly Anne Ploetz, Jeffrey Thomas/Lauren Couglan and Paxon Thomas; Michael William Ploetz (b 1953)/Myra Mooney Ploetz; Linda Sue White (b 1956)/Curt White and daughter Maggie Anne White; Christine Lee Birch (b 1965)/Don Birch and family Lundy Anne Gardner/Kevin Gardner and William Devere Birch. After retiring from baseball in 1953, Ron began work in the electrical department of the Louis Allis Company in Milwaukee. He was promoted to Head of that department in 1959 and served in that capacity until he was sent by the company in 1967 to Evansville, Indiana to oversee the building, and set up the maintenance department, of a new electric motor plant. On April 7, 1960 Ron was seriously injured while supervising a game with a church boy’s club, Christian Service Brigade. His skull was severely fractured when a piano fell on his head, and he lost the sight in his right eye. Initially in very critical condition, he slowly recovered with expert medical care, hard work, the love and care of his family, and his faith in God. Ron’s accident served as a deep foundation for his faith in the following years. After seeing the completion of the new factory in Evansville, Ron accepted a new challenge in 1969 as plant engineer for the Marion Power Shovel Company in Marion, Ohio. He retired in 1994 as Director of Manufacturing Services. During his years in Marion he was active in the community. Ron was a member of Fite Memorial Baptist Church and later of the Trinity Baptist Church where he faithfully served God and his church as Elder and Trustee. In his retirement he served as a volunteer in the Y-men, Meals on Wheels, and the Salvation Army (10 years on their board). To be closer to their daughters and their respective families, Ron and Nancy moved to Fishers, Indiana in December 2014. Ron enjoyed watching sports of any kind and the friendship and love of all who had the honor and pleasure of knowing him. Ron’s appetite for good food and concession stand treats never diminished. He enjoyed Nancy’s cooking all of their 72 years of marriage. He loved to tinker in his garage and every one of his children and many of his friends benefited from his handy work on different home projects. He always had a full heart of love to share and helped any neighbor, friend or family member in need. In his later years, it was difficult for Ron to be on the receiving end of the kindness of others as he spent so much of his life paying it forward. He will be remembered for many things but mostly as a true servant of God and wonderful husband, father, grandfather and friend. He will be truly missed, but Heaven is a better place. A Celebration of Ron’s Life will take place on a later date. Arrangements are being handled by Erlewein Mortuary & Crematory in Greenfield. Friends may share a memory or condolence at www.erleweinmortuary.com.

FISHERS - Ronald Edward Ploetz, was born in Milwaukee, Wisconsin on March 6, 1930 to Adeline Ploetz (nee Hoffman) and William Robert Ploetz. He moved to New London, Wisconsin in 1933, and in 1936 to Coloma, Wisconsin, the birthplace of his... View Obituary & Service Information

The family of Ronald Ploetz created this Life Tributes page to make it easy to share your memories.