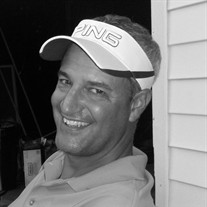 GREENFIELD – Roger L. Schwarzkopf, age 58, of Greenfield, passed away Monday, December 6, 2021 at IU Health University Hospital. Born on March 25, 1963, he was the son of Gail R. Schwarzkopf and Marjorie A. (Huggins) Schwarzkopf. He graduated in 1981 from Blackford High School in Hartford City, Indiana. On January 20, 2001, he married Terri L. Werner in Las Vegas. He worked in sales at Fujifilm N. America Corporation for many years. Prior to Fujifilm, he worked for various companies in film and printing. Roger was a member at Hawk’s Tail Golf course and won many championships. As an avid bicyclist, he was a member of the Greenfield Cycling Club. He was a loving father to his daughter and was devoted to watching her play volleyball. Roger is survived by his loving wife, Terri Schwarzkopf of Greenfield; daughter, Molly Schwarzkopf of Greenfield; brother, Eric (Terri) Schwarzkopf of Fishers; and nephew, Matthew Schwarzkopf of Bakersfield, CA. He was preceded in death by his parents, Gail and Marjorie Schwarzkopf. Visitation will be held on Sunday, December 12, 2021, from 2:00 p.m. until 6:00 p.m. at Erlewein Mortuary & Crematory, 1484 W. US Hwy. 40, Greenfield, IN 46140. A funeral service will be held at the mortuary on Monday, December 13, 2021 at 11:00 a.m. Burial will follow at Park Cemetery in Greenfield. In lieu of flowers, memorial contributions may be made by mail to the American Cancer Society, 5635 W 96th St Suite 100, Indianapolis, IN 46278 or the Hancock County Humane Society, 214 E Main St, Greenfield, IN 46140 or envelopes will be available at the mortuary. Friends may share a memory or condolence at www.erleweinmortuary.com.

The family of Roger Schwarzkopf created this Life Tributes page to make it easy to share your memories.