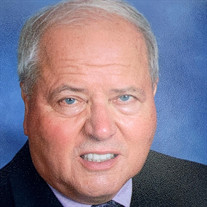 GREENFIELD – Rodger H. Wellenreiter, age 76, of Greenfield, passed away on Wednesday, August 28, 2019. He was born in Bloomington, Illinois on October 23, 1942 to Harold and Oma (Goodin) Wellenreiter. Rodger graduated from Heyworth High School in Illinois in 1960. He received his bachelors in science in education from Illinois State University in 1964. He then went on to earn his PhD in animal husbandry from Michigan State University in 1970. Rodger married Jackie (Yordy) on August 25, 1963 in Heyworth, Illinois. He worked for Eli Lilly in Greenfield as a Senior Poultry Research Scientist from 1970 until retiring in 2002. He was a member of Bradley United Methodist Church. Rodger organized Santa’s Helpers at Eli Lilly. He enjoyed hunting, fishing, golfing, skiing in Colorado, four wheeling, biking, traveling, yardwork, and exercising. Rodger also enjoyed collecting stamps and coins, taking pictures, and journaling. For many years he was a little league umpire for Greenfield Youth Baseball League and the IHSAA. Of all of these things, he most loved traveling and spending each day with his family and eating at whichever restaurant Nicholas would choose. Rodger is survived by his loving wife, Jackie Wellenreiter of Greenfield; daughter, Janeen (Trey) Gill of Greenfield; son, Darren (Destiny) Wellenreiter of Charlotte, NC; six grandchildren, Zach Gill of Greenwood, Nicholas Gill and Brenden Gill both of Greenfield, Kai Wellenreiter, Jax Wellenreiter, and Cruz Wellenreiter all of Charlotte, NC; sisters, Sandy (John) Horner of Armington, IL and Sue (Mike) Bolt of Bloomington, IL; mother-in-law, Bobbie Yordy of Greenfield; and an uncle, Less Wellenreiter of Danvers, IL. He was preceded in death by his parents, Harold and Oma Wellenreiter; and his father-in-law, Willard Yordy. Visitation will be held on Thursday, September 5, 2019, from 4:00 p.m. until 8:00 p.m. at Erlewein Mortuary & Crematory, 1484 W. US Hwy. 40, Greenfield, IN 46140. A funeral service will be held on Friday, September 6, 2019, at 11:00 a.m. at Bradley United Methodist Church, 210 W. Main St., Greenfield, IN 46140 with viewing one hour prior to the service. Pastor Terry Campbell will be officiating. Burial will follow at Park Cemetery in Greenfield. In lieu of flowers, memorial contributions may be made by mail to MADD Indiana, PO Box 141, Fishers, IN 46038, Indiana Natural Resources Foundation, 402 West Washington Street, W256, Indianapolis, IN 46204, Bradley United Methodist Church, 210 W. Main St., Greenfield, IN 46140, or Michigan State University Foundation, 325 E. Grand River Avenue, Suite 275, East Lansing, MI 48823. Envelopes will be available at the mortuary and church. Friends may share a memory or condolence at www.erleweinmortuary.com.

The family of Rodger H. Wellenreiter created this Life Tributes page to make it easy to share your memories.