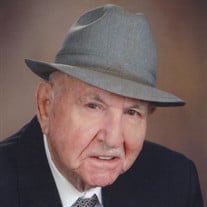 INDIANAPOLIS – Robert Eugene Snider, age 94, of Indianapolis, passed away Sunday, December 6, 2020 at Walker Place Assisted Living Community in Shelbyville. He was born in South Dakota on December 23, 1925 to Robert and Corletta Snider. He graduated from Montgomery High School. Mr. Snider received his Trade Certificate from Lane Drafting School. He served in the Army during World War II from 1945-1946. He married Mary L. (Isaac) on August 30, 1952. He worked for Western Electric for several years as a Tool & Die Maker. Mr. Snider was a member of Bethel Baptist Church in Greenfield. He liked fishing and woodworking. Robert was very wise and was always committed to anything he said he’d do. He loved laughter and pulling pranks on his grandchildren. He is survived by his son, Bill (Myrna) Hardy, Jr. of Evansville; daughters, Dee (Marion) Hammond and Bonnie (Carl) Clark, both of Greenfield; nephew, Stan (Tina) Snider of Indianapolis; great nephews, Trace and Joseph, both of Indianapolis; seven grandchildren; and twenty-two great-grandchildren. He was preceded in death by his parents, Robert and Corletta Snider; wife, Mary Snider; grandson, Devin Clark; and brothers, Jim and Dale Snider. A private family funeral service will take place on Friday, December 11, 2020 at Erlewein Mortuary & Crematory, 1484 W. US Hwy. 40, Greenfield, IN 46140. Pastor Tommy Hensley will be officiating. Burial will follow at New Palestine Cemetery in New Palestine. Military rites will be presented by the Greenfield Veterans Honor Guard and the U.S. Army Honor Guard. As a reminder, the government mandate requires guests to wear masks when inside our building. In lieu of flowers, memorial contributions may be made by mail to the Bethel Baptist Church – Missions Fund 1610 S. State St. Greenfield, IN 46140, by website at https://www.bethelbcg.org/#welcome/, or envelopes will be available at the mortuary. Friends may share a memory or condolence at www.erleweinmortuary.com.

The family of Robert Eugene Snider created this Life Tributes page to make it easy to share your memories.