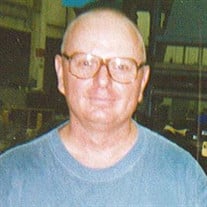 GREENFIELD – Robert Lee Maberry, age 67, of Greenfield, passed away on Saturday, October 20, 2018. He was born on February 9, 1951 in Indianapolis as the son of Donald Leroy Maberry and Jean Ward (Arthur) Bennett. He graduated from Arsenal Tech High School. Robert served in the U.S. Marine during the Vietnam War from 1968-1972. He was proud of serving his country and always wore a shirt that displayed his loyalty. He worked at GM and retired in 2013 from Allison’s after many years. Robert was a member of the UAW. He loved woodworking and sporty cars. Mr. Maberry had a very caring heart and loved giving to various worthy organizations including: Wheeler Mission, Vietnam Veterans, WeCare, AMVETS, DAV, St. Jude’s, Riley Children’s Hospital, Red Cross, Hope House, and ASPCA. He liked good food and spending time with his furry family dogs, Colonel, Gunner, Bo, Shelby, and Ginger. Robert was a genuine and good friend to all and was always there for those in need. Robert is survived by his brother, Bruce Donald (Rebecca) Maberry of Westport, IN; caregiver, Marilyn Lowe of Greenfield; aunt, Marge Faulconer, nephew, Anthony Maberry; great-nephew, Conner; and several cousins. He was preceded in death by his parents. Visitation will be held on Tuesday, October 30, 2018, from 11:00 a.m. until 12:00 p.m. at Erlewein Mortuary & Crematory, 1484 W. US Hwy. 40, Greenfield, IN 46140. A graveside service will follow at 2:30 p.m. at Indiana Veterans Memorial Cemetery, 1415 Msh North Gate Rd, Madison, IN 47250. In lieu of flowers, memorial contributions may be made by mail to Brain Support Network, PO Box 7264, Menlo Park, California 94026 or Tourette Association of America, 42-40 Bell Boulevard, Suite 205, Bayside, NY 11361. Friends may share a memory or a condolence at www.erleweinmortuary.com.

GREENFIELD &#8211; Robert Lee Maberry, age 67, of Greenfield, passed away on Saturday, October 20, 2018. He was born on February 9, 1951 in Indianapolis as the son of Donald Leroy Maberry and Jean Ward (Arthur) Bennett. He graduated from Arsenal... View Obituary & Service Information

The family of Robert Lee Maberry created this Life Tributes page to make it easy to share your memories.