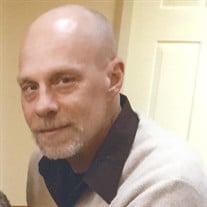 EVERTON, MISSOURI – Robert “Bob” W. Hannon, age 53, of Everton, Missouri, passed away on Monday, August 10, 2020 at Big Spring Nursing Home in Humansville, Missouri. He was born in Wichita, Kansas on October 5, 1966 to Floyd B. Hannon II and Susan Hannon King. He graduated from Carmel High School in 1986 and served in the U.S. Air Force. He worked for Performance Food Group in Springfield, MO for 10 years. Bob attended Everton Christian Church. He was an avid fisherman and enjoyed sports, especially football and NASCAR. Bob is survived by his father, Floyd B. Hannon of Greenfield; step-mother Joan Hannon of Greenfield; wife, Naomi (Garcia) Hannon of Texas; children, Jessica (Jared) Leyendecker of Altamont, TN, Jennifer (Austin) Caldwell of Lewisburg, TN, Jamie Hannon of Carmel, son, Ricky Hannon of Frankfort, IN, and Haylee Hannon of Frankfort, IN; two grandchildren; brother, Steve (Carolyn) Hannon of Fishers; and a sister, Sandy (Jerry) Sabastian of Carmel. He was preceded in death by his mother, Susan King. A graveside service will take place on Thursday, August 27, 2020, at 11:00 a.m. at Park Cemetery in Greenfield. In lieu of flowers, memorial contributions may be made to a charity of your choice. Friends may share a memory or condolence at www.erleweinmortuary.com. Arrangements are being handled by Erlewein Mortuary & Crematory in Greenfield.

The family of Robert "Bob" W. Hannon created this Life Tributes page to make it easy to share your memories.