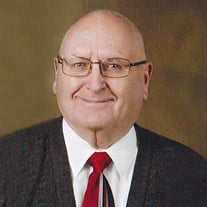 GREENFIELD – Robert Joseph Davis, Sr., age 88, of Greenfield, passed away Monday, September 9, 2019 at Rawlin’s House in Pendleton, IN. He was born on September 30, 1930 in Sullivan, IN, the son of Vernon Davis and Ernestine (Muehler) Davis. He married the love of his life, Patsy Joann (Martin) Davis on December 31, 1952 in Chatsworth, GA. He graduated from Eden High School in 1948 and went on to study at the Gradwohl School of Laboratory Technique in St. Louis where he became a Certified Medical Technologist in 1950. He served as a Navy Hospital Corpsman from 1951-1952 during the Korean War. After his career in the Navy, he worked as a Chief Medical Technologist and Assistant Business Manager for Thornton-Hammond Medical Laboratories for 47 years. He received a Bachelor of Science in Business Administration from the University of the State of New York in 1979. Robert loved to serve his community either within the Eden chapter of the Masonic Lodge, or by sitting as a member of the Selective Services Board for 20 years. Mr. Davis was a member of the Church of Jesus Christ of Latter-Day Saints, Cumberland Ward. Robert is survived by his children, Robert J. (Mary A.) Davis, Jr., Brenda (William) Blanton and Vickie Langenberger all of Greenfield; five grandchildren, Joyce Mae (Steve) Potasnick of Williston, ND, Jason Tyler (Andrea) Riley of Morristown, Sara Arlene Langenberger of Greenfield, Craig Blanton and Scott Blanton both of Fortville; two great-grandchildren, Tyler Riley and Skyler Riley both of Morristown, sister Mary Ann (Davis) LaRue of Fortville, two nieces, two nephews and many cousins. He was proceeded in death by his parents Vernon “Cy” Davis and Ernestine (Muehler) Davis, his loving wife Patsy Joann (Martin) Davis, his younger sister Caroline Sue Davis, and his nephew Vernon LaRue. Robert will be remembered by family and friends for his humor, his wisdom, and his kindness. He lived by a quote that said “I shall pass this way but once; any good that I can do or any kindness I can show to any human being; let me do it now. Let me not defer nor neglect it, for I shall not pass this way again.” -Etienne de Grellet. Visitation will be held on Thursday, September 12, 2019, from 3:00 p.m. until 7:00 p.m. at Erlewein Mortuary & Crematory, 1484 W. US Hwy. 40, Greenfield, IN 46140. A private graveside service will take place at a later date. In lieu of flowers, donations in Robert’s name to the Indiana Alzheimer’s Association will be appreciated. Friends may share a memory or condolence at www.erleweinmortuary.com.

The family of Robert Joseph Davis Sr. created this Life Tributes page to make it easy to share your memories.