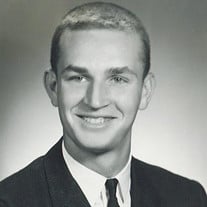 MORRISTOWN – Robert “Bobby” L. Hauk, age 73, of Morristown, passed away November 16, 2019. He was born in Shelby County on April 18, 1946 to Howard and Lorraine (Boring) Hauk. He graduated from Morristown High School in 1964. Bobby served in the United States Army. He married Kay (Andis) Hauk on January 7, 1967. Bobby worked at the Chrysler Corporation for 39 years and was a member of Morristown Methodist Church. He enjoyed spending time with family and attending his grandchildren’s sporting events. He especially enjoyed watching basketball and playing golf. In his free time, he was often at The Bluebird round table chatting with friends. He is survived by his loving wife, Kay Hauk; daughter, Rhonda (Chuck) Smith; son, Bruce (Kim) Hauk; brothers, Mike (Frances Kay) Hauk and Richard “Dickie” Hauk; sisters, Linda Noel and Donna Hauk; grandchildren, Stephanie Clayton, Madison Smith, Peyton Hauk and Ashlyn Hauk. He was preceded in death by his parents; and brother, Jack Hauk. Visitation will be held on Wednesday, November 20, 2019, from 4:00 p.m. until 8:00 p.m. at Erlewein Mortuary & Crematory, 1484 W. US Hwy. 40, Greenfield, IN 46140. A funeral service will be held on Thursday, November 21, 2019, at 10:00 a.m. also at the mortuary. Pastor Jim Coyle will be officiating. Burial will follow at Asbury Cemetery in Morristown. In lieu of flowers, memorial contributions may be sent directly to Hancock Regional Hospital Foundation, Attn: Hospice, 801 N. State Street, Greenfield, IN 46140 or envelopes will be available at the mortuary. Friends may share a memory or condolence at www.erleweinmortuary.com.

The family of Robert "Bobby" Hauk created this Life Tributes page to make it easy to share your memories.