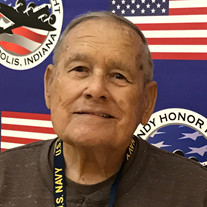 INDIANAPOLIS – Rickey Dean “Rick” Newby went to the lord on June, 16, 2021 surrounded by his loving family. Rick was born on August 11, 1945 in Mill Shoals, Illinois to the late Vern and Wilma (Stanley) Newby. Rick graduated from Mills Prairie High School, class of 1964, in Mill Shoals. Rick attended Eastern Illinois University until being drafted into the US Navy in 1964, during the Vietnam War. He was a proud veteran during his time in the US Navy; he was an Aviation Electronics Technician serving on several different Navy aircraft carriers. He traveled around the world and passed the equator twice. After returning home to Illinois from the war, Rick continued to become an electrician and worked in that field until he retired in 2003. He was a member of the American Legion. He was a loving father and a wonderful husband. The greatest joy in his life was spending time with his children and grandchildren. Along with creating memories with his loved ones, he enjoyed bass tournament fishing and recreational fishing with family and friends. Rick was also an avid golfer. When he wasn’t fishing, he was golfing. Rick was a native of Mill Schoals, Illinois and was preceded in death by his first wife, Lillian (Smith) Newby and his parents, Vern and Wilma (Stanley) Newby and sister, Shirlene Worosz. Rick is survived by his wife, Nancy (Schwartzlose) who he married in 1985 in Olney, Illinois. They relocated their family to Central Indiana in 1986 when Rick took a job with Gaylor Electric. Rick was the proud father and is survived by two beautiful daughters, Amy Pollock (Jeff Longere) of McCordsville and Sonya White (Chris) of Cicero; and his son, Dusty Jones of Indianapolis. Rick was overjoyed by and so proud of his grandchildren, Jackson Pollock (Madison) of Fort Worth, TX, Harrison Pollock of McCordsville, Kaylie and Kyle White of Cicero, Delaney Jones of McCordsville, Austin Pryor of Indianapolis; brother, Stanley Newby (Georgia) of Chester, IL; and sister, Toni Bowman (Gary) of McLeansboro, IL; and several nieces, nephews, great nieces and nephews. Visitation will be held on Wednesday, June 23, 2021, from 9:30 a.m. until 11:00 a.m. at Erlewein Mortuary & Crematory, 1484 W. US Hwy. 40, Greenfield, IN 46140. A funeral service will take place immediately following the visitation at 11:00 a.m. with Pastor Rob McCord officiating. Burial will follow at Marion National Cemetery in Marion, Indiana. In lieu of flowers, memorial contributions may be made by mail to the National Kidney Foundation of Indiana, 911 E. 86th St. Suite 100, Indianapolis, IN 46240 or Indy Honor Flight, PO Box 10, Plainfield, IN 46168 or envelopes will be available at the mortuary. Friends may share a memory or condolence at www.erleweinmortuary.com.

The family of Rickey "Rick" Newby created this Life Tributes page to make it easy to share your memories.