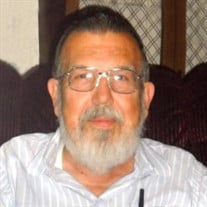 On Tuesday, September 8, 2020, Richard Lee Posey, loving Father of three children, Grandfather of five and Great Grandfather of three passed away at age 81. Richard was born on May 18, 1939 in Indianapolis, IN to Carl Posey and Wilma (Gregory) Posey. He graduated in 1957 from Arsenal Tech High School and went on to attend Butler University with a Major in Broadcast Engineering. On July 16, 1966, he married Patronuia Elaine Sparks. They raised two sons, Byron and Bryce, and one daughter Atheana. While attending Butler University Richard worked at Shoemaker Motion Picture Company and continued working there up until he started full time employment at RCA in 1965 and after 41 years of service as an Electronics Engineer, he retired in 2006. Upon retirement Richard had many patents and designs credited to his name. Richard also worked part time for the Indianapolis Parks Dept. from 1969-1990 preforming routine maintenance on the sound and recording equipment as well as designing sounds systems for the Ellenberger ice skating rink and the Major Taylor Velodrome. Richard also maintained part time employment at Wolf Tracks studio. Upon his semi-retirement Richard joined the Greenfield Police Department as a parking enforcement agent, upon leaving he started working at the local Walmart in Greenfield where he was working full time up to the time of his passing. Richard had many passions and hobbies, from woodworking, car restoration, photography, videography to restoration of antique radios and TV’s, and adding to immense collections of electronics, recording media and automotive memorabilia. Richard was preceded in death by his father, Carl, and his mother, Wilma. As well as his wife, Patronuia. He is survived by his three children, Atheana, Byron, and Bryce; his is five grandchildren, Andrienna, Brittany, A’Driella, Micaela, Christopher; and three great-grandchildren Eli, Lovell, Issac. Visitation will be held on Saturday, September 19, 2020, from 1:00 p.m. until 5:00 p.m. at Erlewein Mortuary & Crematory, 1484 W. US Hwy. 40, Greenfield, IN 46140. A funeral service will be held on Sunday, September 20, 2020 at 10:00 a.m at the mortuary. Burial will follow at Philadelphia Cemetery in Greenfield. As a reminder, masks are required in public indoor spaces and please practice social distancing. Flowers may be sent to 1484 W. US Hwy 40, Greenfield, IN 46140. Friends may share a memory or condolence at www.erleweinmortuary.com.

On Tuesday, September 8, 2020, Richard Lee Posey, loving Father of three children, Grandfather of five and Great Grandfather of three passed away at age 81. Richard was born on May 18, 1939 in Indianapolis, IN to Carl Posey and Wilma (Gregory)... View Obituary & Service Information

The family of Richard Posey created this Life Tributes page to make it easy to share your memories.