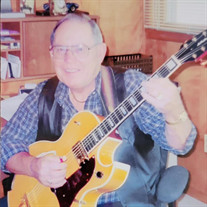 INDIANAPOLIS – Richard L. Morgan, of Indianapolis, passed away Saturday, December 25, 2021 at his home. He was born in Indianapolis on June 27, 1931 to Myrtle (Yates) Morgan and Arvel Morgan. He worked in the early years for Citizen Gas as a pipefitter until he made his passion for music his career. He played guitar and sang on the Shorty Sheehen Show on WTT4 in Bloomington, IN where he met his wife Betty Hunter. They were married on November 19th, 1949. He went on to have a successful career in music, playing with the Lenny Wilson Trio, working on the Grand Ole Opry with Charlie Louvin and performing a duet with his wife Betty and his son Phil for many years, just to name a few. He was a member at New Bethel Baptist Church in Wanamaker. He loved camping, riding his bike, playing music and spending time with his family. He is survived by his children, David (Donna Kay Dial) Morgan, Phil (Pat) Morgan, and Karen Pappas; grandchildren, Beth Ann (Kerry) Grass, Adam (Rhonda Ward) Morgan, and Shannon Zorman; great-grandchildren, Jacob, Sean and Sydney; and great-great grandson, Quinn. He was preceded in death by his parents, Myrtle and Arvel Morgan; wife, Betty Morgan; brothers, Jim Morgan and Maurice Morgan; and 2 sisters, Thelma Sylvester and Nancy Elliott.. A Celebration of Richard’s Life will take place on a later date. Arrangements are being handled by Erlewein Mortuary & Crematory in Greenfield. In lieu of flowers, memorial contributions may be made by mail to New Bethel Baptist Church, 8936 Southeastern Ave, Indianapolis, IN 46239. Friends may share a memory or condolence at www.erleweinmortuary.com.

INDIANAPOLIS &#8211; Richard L. Morgan, of Indianapolis, passed away Saturday, December 25, 2021 at his home. He was born in Indianapolis on June 27, 1931 to Myrtle (Yates) Morgan and Arvel Morgan. He worked in the early years for Citizen... View Obituary & Service Information

The family of Richard Morgan created this Life Tributes page to make it easy to share your memories.