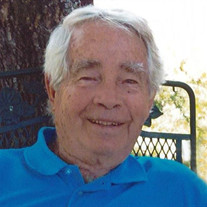 GREENFIELD – Richard Lynn “Dick” Davis, age 84, of Greenfield, passed away on Wednesday, January 9, 2019 at St. Vincent Heart Center. He was born in Fairmount, Illinois on September 1, 1934 to Chauncey and Violet (Byrne) Davis. Dick graduated from Anderson High School in 1952. He married Janet (Shroat) on May 15, 1982 in Anderson. He worked for Delco-Remy as a special machine builder for 30 years before retiring in 1982. Dick was a member of the UAW 662 and former member of Masonic Lodge in Anderson, Murat Shrine, and Elks Lodge. He was also a past associate guardian with Jobs Daughters Bethel #126. Dick attended Trinity Park United Methodist Church. He was known as a jack of all trades. He was an avid outdoorsman and enjoyed fishing, boating, and hunting. His family was his number one priority and loved spending time with them, especially his grandchildren. Dick really enjoyed spending time at Lake Wawasee. Dick is survived by his daughter, Cheryl (Mark) Jordan of Greenfield; special friend, Nancey Howrey and her family; step-sons, Jeff Begley, Brian (Brenda) Begley, and Ben Begley; step-daughters, Diane Begley and Beverly Begley; 12 grandchildren; and several great-grandchildren. He was preceded in death by his parents, Chauncey and Violet Davis; wife, Janet Davis; son, Mike Davis; and brother, Jerry Davis. A memorial service will be held on Saturday, January 26, 2019, at 11:00 a.m. at Trinity Park United Methodist Church, 207 W. Park Ave, Greenfield, IN 46140. Memorial contributions may be made by mail to Trinity Park United Methodist Church, 207 W. Park Ave, Greenfield, IN 46140, or envelopes will be available at the church. Friends may share a memory or a condolence at www.erleweinmortuary.com. Arrangements are being handled by Erlewein Mortuary & Crematory in Greenfield.

The family of Richard "Dick" Davis created this Life Tributes page to make it easy to share your memories.