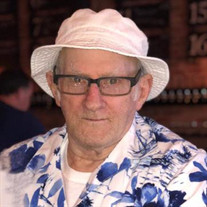 GREENFIELD – Richard David Adkison III, age 73, of Greenfield, passed away Sunday, October 7, 2018 at his home. He was born on October 29th, 1944 in Beech Grove as the son of Richard Elmer Adkison II and Alberta (Dillard) Adkison. He went to Shortridge High School. He married Sandra K. (Graves) Adkison on February 27th, 1966. Richard worked at BAC Local 4 as a brick mason for many years and earned his 50-year pin from the local bricklayer’s association. Over the last 18 years he built many friendships flying military flight simulators and training fighters going to Iraq. Having been a scuba diver since he was a teenager, he was a dive master and member of the Midwest Scuba Divers. Richard earned his black belt in Taekwondo in 1982. He also enjoyed extreme downhill mountain biking and won the silver medal in the 35 and over group in the X-Games at the age of 62. Other hobbies he enjoyed were kayaking, video games, playing guitar, fishing and spending time with family. He is survived by his son, R. David (Missy) Adkison; daughter, Tabatha (Carl) Kingsbury; grandchildren, Thor (Brittany), Austin, Alexxys, Mychaela, Sara, and Cole; great-grandchild, Wayne; and a special niece, Kelly Perry. He was preceded in death by his wife and parents. Visitation will be held on Thursday, October 11, 2018, from 11:00 a.m. until 1:00 p.m. at Erlewein Mortuary & Crematory, 1484 W. US Hwy. 40, Greenfield, IN 46140 with a funeral service following at 1:00 p.m. Pastor Jeri Barrett-Thomas will be officiating. Burial will follow at Grove Lawn Cemetery in Pendleton. In lieu of flowers, memorial contributions may be made by mail to Hancock Regional Foundation, Attn: Hospice Unit, 801 North State Street Greenfield, IN 46140 or envelopes will be available at the mortuary. Friends may share a memory or a condolence at www.erleweinmortuary.com.

GREENFIELD &#8211; Richard David Adkison III, age 73, of Greenfield, passed away Sunday, October 7, 2018 at his home. He was born on October 29th, 1944 in Beech Grove as the son of Richard Elmer Adkison II and Alberta (Dillard) Adkison. He... View Obituary & Service Information

The family of Richard David Adkison III created this Life Tributes page to make it easy to share your memories.