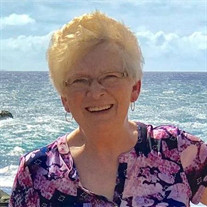 FISHERS - Rebecca Jean (Beatty) Crump, age 77, of Fishers, IN went home to her Heavenly Father on Friday, April 12, 2019 at her residence, surrounded by laughter and family. Becky was born in Wilkinson, IN on December 24, 1941 as the oldest of the seven children of Gene I. & Kathryn L. (Mix) Beatty. She married Larry Eugene Crump on June 2, 1961. She graduated from Knightstown High School in 1959 and worked at Western Electric for many years before retiring in 1985; however, Becky’s true life’s work was taking care of her loved ones. Becky and Larry's legacy are their children, Larry E. (Sharon) Crump, Jr., New Palestine, IN; Lt. Col. Carrie (Bruce) Van Zant (USAF-Retired), Dayton, OH; Barry (Janet) Crump, Fishers, IN; and also her adored grandchildren, Erin (Thomas) Tuegel, Sydnie (Joseph) Pennington, Alexandra Crump, Rebecca, Rory and Rhianna Dunne, Riley and Adam Crump, and great-granddaughter Rosalind Tuegel. Becky looked forward to the day she would be reunited with her beloved husband, Larry, who preceded her in death in 2009. In addition to her husband and parents, she was also preceded in death by brother, Robert Beatty and sister, Roberta (Berti) Pickney. Left to mourn her, but also to remember her with laughter and gratitude are her loving sisters, Beatrice (Allen) Nelson, Troutdale, OR; Pamela (Steve) Polston, Batesville, AR; Brenda (John) McGaw, Westminister, CA; and Penny (Charlie) Keyes, Bright, IN. Her sisters were with her in great times on their "Sister Trips" to Hawaii and California and also throughout her illness, providing comfort, care and always laughter. Becky also leaves her lifelong friend, Charlene Manifold and many nieces, nephews, aunts, uncles and cousins. Visitation will be held on Wednesday, April 17, 2019 from 4:00 p.m. until 8:00 p.m. at Erlewein Mortuary & Crematory, 1484 W. US Hwy. 40, Greenfield, IN 46140. A funeral service will be held on Thursday, April 18, 2019 at 11:00 a.m. at the mortuary. Reverend Ron Mills will be officiating. Burial will follow at McCray Cemetery in Wilkinson, IN. In lieu of flowers, memorial contributions may be made by mail to IU Home Hospice, 950 N. Meridian Street, Suite 700, Indianapolis, IN 46204 or to the American Cancer Society, 5635 West 96th Street, Suite 100, Indianapolis, IN 46278. Friends may share a memory or a condolence at www.erleweinmortuary.com.

FISHERS - Rebecca Jean (Beatty) Crump, age 77, of Fishers, IN went home to her Heavenly Father on Friday, April 12, 2019 at her residence, surrounded by laughter and family. Becky was born in Wilkinson, IN on December 24, 1941 as the oldest... View Obituary & Service Information

The family of Rebecca Crump created this Life Tributes page to make it easy to share your memories.