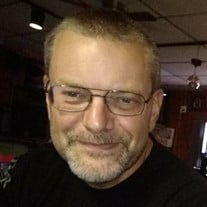 SHIRLEY – Randall B. “Randy” Parks, age 53, of Shirley, Indiana passed away on Monday, September 23, 2019. He was born in Richmond on February 4, 1966 to Elbert Paul Parks and Susan Carol (Barfield) Counceller. He graduated from Union County High School in 1984. He served in the U.S. Army as a Morse code interceptor for six years. Randy married Melissa (Wagers) on December 31, 1994 and she passed away in 2018. He worked for Rockwell Automation as an engineer for 19 years. Prior to working at Rockwell Automation, he worked for Ahaus Tool & Engineering in Richmond. Randy was passionate about working on cars and riding his Harley. He also enjoyed shooting guns and playing video games. He most of all loved spending time with his grandchildren. Randy is survived by his father, Elbert Parks; children, Mekyla Parks, Austin Parks, Mekynlee Parks, and Caleb Parks; three grandchildren, Lakynn, Lorelye, and Leesyn; brothers, Richard Parks and Eric Parks; sister, Julia Hamilton; and significant other, Kathy Burchett. He was preceded in death by his mother, Susan Counceller; wife, Melissa Parks; and infant sister, Robyn Parks. Visitation will be held on Monday, September 30, 2019, from 10:00 a.m. until 12:00 p.m. at Erlewein Mortuary & Crematory, 1484 W. US Hwy. 40, Greenfield, IN 46140. A funeral service will take place immediately following the visitation at 12:00 p.m. Burial will follow at Glen Haven Memorial Gardens in Richmond, IN with military rites presented by the active duty. Friends may share a memory or condolence at www.erleweinmortuary.com.

The family of Randall "Randy" Parks created this Life Tributes page to make it easy to share your memories.