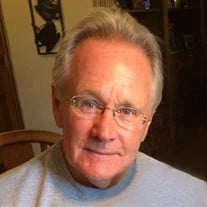 GREENFEILD – Randall Lloyd Parker, age 71, of Greenfield, passed away on Sunday, May 12, 2019. He was born in Watseka, Illinois on June 14, 1947 to Richard and Juanita Marie (Parker) Breeden. Randy married Margaret E. (York) on June 1, 1973 in Indianapolis. He worked as a union carpenter for over 40 years. He most recently was the chief of purchasing and manager of warehouse and equipment at Circle B Construction where he retired in 2012. Randy was a member of the Carpenters Union and Aristos Bass Club. He enjoyed hunting, fishing, and being outdoors. Randy is survived by his wife, Maggie Parker of Greenfield; children, Candice Marie “Candy” Parker Lyon of Noblesville, Brett Randall Lloyd (Taylor) Parker of Noblesville, and Autumn Ashley Marie (John) Currens of Indianapolis; grandchildren, Kailee Lyon, Zachary Lyon, Ally Currens, Nolan Currens, Alaina Currens, and Jaxton Parker; great-grandchildren, Achilles Lyon and Kiersten Abresch and one on the way; sisters, Sandra (Don) Bunnell of Illinois, Kathlene (Jim) Styck of Illinois, Deborah (Mike) White of Missouri, and Charlotte (Carl) Hickle of Indiana; and several nieces and nephews. He was preceded in death by his parents, Richard and Juanita Breeden; and grandparents, Dorothy and Earnest Parker. Visitation will be held on Friday, May 17, 2019, from 11:30 a.m. until 1:00 p.m. at St. Jude Catholic Church, 5353 McFarland Road, Indianapolis, IN 46227. A funeral service will immediately follow at 1:00 p.m. Father Steve Banet will be officiating. Burial will take place at a later date at New Palestine Cemetery. Memorial contributions may be made by mail to the Alzheimer’s Association, 50 E. 91st Street, Suite #100, Indianapolis, IN 46240 or envelopes will be available at the church. Friends may share a memory or a condolence at www.erleweinmortuary.com. Arrangements are being handled by Erlewein Mortuary & Crematory in Greenfield.

The family of Randall L. Parker created this Life Tributes page to make it easy to share your memories.