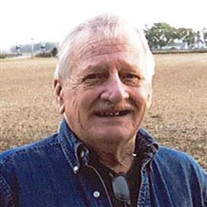 FORTVILLE - Patrick J. Dalton, age 77, of Fortville, passed away Sunday, June 30, 2019. He was born in Beech Grove on September 7, 1941 to John and Edna (Miller) Dalton. He attended Lawrence Central High School and studied at Purdue University and IUPUI. Patrick was the Business Manager for Glazier Local Union 1165 for 30 years and was a member for 55 years. He was a member of St. Thomas Catholic Church, the Fortville Optimist Club and the Amvets in Pendleton. Patrick acted as a mentor for many young men through coaching 5th and 6th grade football at Mt. Vernon and being a troop leader and an Eagle Scout which he was most proud of. He is survived by his; daughters, Kellie L. (Bryan) Kelly of McCordsville, Tracey L. (Brett) Kelly of McCordsville, Shannon M. (Doug) Lee of Charlotte, NC; son, Sean P. (Stacie) Dalton of Oaklandon brother, Thomas Dalton of Madison, WI; grandchildren, Katie, Danny, Patrick, Matthew (Jamie), Brock, Erin, Erickson, Caden, Connor and Kaley; and great-grandchildren, Adriana, Kloey, and Mason. He was preceded in death by his parents; wife of 56 years, Barbara Jean (Mayhew) Dalton; wife, Laura Ann (Degelow) Dalton; brothers, Jack Dalton and Dan Siler; and sister, Fran Dalton. There will be private services for the family. Arrangements are being handled by Erlewein Mortuary & Crematory in Fortville. Friends may share a memory or condolence at www.erleweinmortuary.com.

The family of Patrick Dalton created this Life Tributes page to make it easy to share your memories.