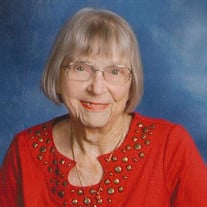 HAUBSTADT – Muriel “June” (Berninger) Denis, age 93, of Haubstadt, Indiana, passed away on Friday, May 18, 2018 at St. Vincent Hospital in Evansville. She was born on June 17, 1924 in Concord, New Hampshire as the daughter of Henry and Martha (Spaine) Berninger. She served in the U.S. Navy during World War II from 1944-1946. She graduated from St. John High School in 1941. June married Paul Anthony Denis on February 14, 1946 in New Jersey. She was a secretary for 10 years at Ossining School Systems in New York and a member of St. Michael Catholic Church. June enjoyed playing Bingo and spending time with her family. June is survived by her sons, Paul (Trudy) Denis of Claremore, OK and Clark Denis of Knightstown; daughters, Michelle (Joseph) Goodman of Mission Viejo, CA and Martha Denis of Haubstadt, IN; five grandchildren; and three great-grandchildren. She was preceded in death by her parents; husband; and sisters, Florence Lawson and Winifred Carl. Visitation will be held on Thursday, May 24, 2018, from 9:00 a.m. until 11:00 a.m. at St. Michael Catholic Church, 519 Jefferson Blvd, Greenfield, IN 46140. A mass of Christian burial will immediately take place following the visitation at 11:00 a.m. Father Aaron Jenkins will be officiating. Burial will follow at Forest Lawn Cemetery in Greenwood. Memorial contributions may be made by mail to St. Michael Catholic Church, 519 Jefferson Blvd, Greenfield, IN 46140, or envelopes will be available at the mortuary and church. Friends may share a memory or a condolence at www.erleweinmortuary.com. Arrangements are being handled by Erlewein Mortuary & Crematory in Greenfield.

The family of Muriel "June" Denis created this Life Tributes page to make it easy to share your memories.