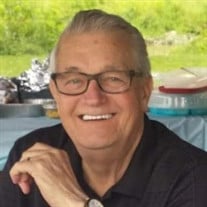 NEW PALESTINE - Mitchell L. “Mickey” Cox, age 82, of New Palestine, passed away on Wednesday, July 7, 2021. He was born in Indianapolis on August 21, 1938 to Isom and Dorthea E. “Dottie” (Adams) Cox. He served in the U.S. Marines from 1955-1958. Mitchell was also a sergeant with the Indiana National Guard from 1983-1985 and was proudly sworn in by his son, Mitchell in 1983. On December 3, 1960, he married Bonnie (Larrabee) Cox who passed away on August 3, 2005. They were married for over 44 years. Mitchell married Joan “Joni” Romeril-Cox on November 29, 2008 in Greenfield. He worked for RCA as a maintenance engineer for over 30 years before retiring in 2004. Mickey was a member of Greenfield Moose Lodge and American Legion Post #119. He was a jack of all trades and enjoyed working on antique cars, woodworking and fixing things. Mickey is survived by his wife, Joni of New Palestine; son, Mitchell (Cathy) Cox of Fishers; daughters, Kamie (Michael) Welfl and Kari (Steve) Walden both of Greenfield; daughter-in-law, Barbara Cox of Indianapolis; step-children, Holly (Michael) Burton of Indianapolis and Jeffery (Michelle) Romeril of Fortville; nine grandchildren; six step-grandchildren; many great and step-great grandchildren; and siblings, Eva Neel of Shelbyville, Ike Cox of Indianapolis, Frederick Cox of Florida, Della “Lindy” Shaw of Florida, and Constance “Connie” Reberger of Florida. He was preceded in death by his parents, Isom and Dottie Cox; first wife, Bonnie Cox; son, Rickey Cox; step-son, Michael Romeril; and siblings, Thelma Parker and Sherman Cox. A celebration of life gathering will take place on Friday, July 16, 2021, from 12:00 p.m. until 2:30 p.m. at Erlewein Mortuary & Crematory, 1484 W. US Hwy 40, Greenfield, IN 46140. A graveside service will take place at 3:00 p.m. at Park Cemetery in Greenfield. Military honors will be presented by the Greenfield Veterans Honor Guard. In lieu of flowers, memorial contributions may be made by mail to the American Cancer Society, PO Box 22478, Oklahoma City, OK 73123 or Franciscan Hospice House, 8414 Franciscan Lane, Indianapolis, IN 46237. Envelopes will be available at the mortuary. Friends may share a memory or condolence at www.erleweinmortuary.com.

The family of Mitchell "Mickey" Cox created this Life Tributes page to make it easy to share your memories.