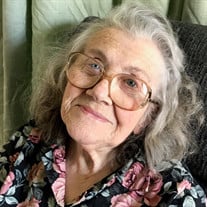 GREENFIELD - Mildred Anabelle "Ann" Taylor, 88, passed away peacefully in Greenfield, Indiana, on January 14, 2021. She was born in Farmington, Michigan, on April 17, 1932, to her parents Hazen C. Traves and Marie (Butters) Traves. Ann was preceded in death by her parents, her husband Eugene Alfred Taylor, her brother Robert Traves, and her sisters, Rose Hutchins-Mosher and Jennie Herron. Ann's childhood was spent at Goose Lake, Michigan, in Hillsdale County. She was a graduate of Litchfield High School and lived her young adult life in Tekonsha. Her married life was spent in Detroit. Upon being widowed in 1958, she moved to Union City where she resided for nearly 60 years. During her work life, Ann was a waitress, a childcare operator, a tailor and seamstress, an elementary teacher's aide, and a retail sales clerk for over two decades at Hensley's Five and Dime in Union City. Among her many gifts and talents were sewing, embroidery, crocheting, quilting, and upholstering. Her needle-crafts were showcased in a local Methodist Church event displaying Barbies wearing fashions through the decades and also in circus animal costumes for Union City Elementary students on parade. Gardening was her passion, preserved and put to good use in her dedicated canning and cooking. Her strawberry jam, fruit pies, frosted butter cookies, and homemade cinnamon rolls were seasonal favorites. Ann was a proponent for disabled American veterans, Native American children, and stray cats, and made contributions to these causes with regularity. She valued education and held high expectations for her children. She had a special affection for hummingbirds, resulting in an extensive curio cabinet collection of hummingbird figurines. Ann was a friend in deed and a "Kool-Aid" mom to kids in the neighborhood. She possessed a lively wit and wisdom and favored adages with embedded truth to share. She is survived by her daughter Cindy Taylor of Indianapolis, her son Gene (Sherrie) Taylor of Allenton, Michigan, and grandchildren Claire and Dylan Taylor. A private family graveside service will be held in her honor in the Spring at Pulaski Cemetery in Jackson County, Michigan. In lieu of flowers, donations in memoriam can be made to the Michigan Humane Society, by website at https://www.michiganhumane.org/donatenow/. Arrangements are being handled by Erlewein Mortuary & Crematory in Greenfield.

The family of Mildred "Ann" Taylor created this Life Tributes page to make it easy to share your memories.