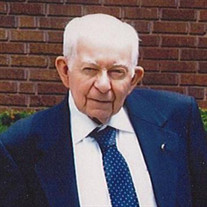 INDIANAPOLIS – Meredith E. Smith, age 92, of Indianapolis, passed away on Monday, December 7, 2020. He was born in Indianapolis on July 6, 1928 to Samuel M. and Helen M. (Miller) Smith. He graduated from Brownsburg High School in 1947. He served in the U.S. Army during the Korean War and was awarded the Bronze Service Star. He married Janet M. (McCord) on March 4, 1956. He worked security for Waldon Security for many years before retiring in 2001. Meredith previously worked for Pitney Bowes from 1970-1985. He was a member of Eden Masonic Lodge, American Legion, and Traders Point Christian Church. He enjoyed gardening, working in the yard and fishing. Meredith is survived by his wife, Janet Smith of Indianapolis; children, Wayne (Debbie) Smith of Brownsburg, Ronald Smith of Indianapolis, Kathie (John) Fail of Georgia, and Laura Smith of Indianapolis; grandchildren, Dustan (Kelli) Smith, Ashley Fail, Michael Fail, and Rebecca (Kyle) Gant; and three great-grandchildren. He was preceded in death by his parents; sisters, Patty Good and Pearl Copp. A graveside service will be held on Friday, December 18, 2020, at 11:00 a.m. at Memorial Park Cemetery in Indianapolis. Military rites will be presented by the Greenfield Veterans Honor Guard. As a reminder, the government mandate requires guests to wear masks and please practice social distancing. In lieu of flowers, memorial contributions may be made by mail to the Disabled American Veterans, P.O. Box 14301, Cincinnati, OH 45250-0301, by website at https://www.dav.org/. Friends may share a memory or condolence at www.erleweinmortuary.com. Arrangements are being handled by Erlewein Mortuary & Crematory in Greenfield.

The family of Meredith E. Smith created this Life Tributes page to make it easy to share your memories.