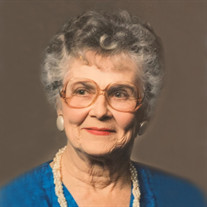 Maxine (Kirkpatrick) Holt, 96 of rural Spencer, IN passed away on Wednesday, May 22nd, 2019 at Hendricks Regional Health, Danville, IN. Born April 13th, 1923, Maxine was the youngest daughter of Claude Kirkpatrick and Bertha Shelby Kirkpatrick from rural Charlottesville in eastern Hancock County IN. She was the youngest of a family of five children; predeceasing her were siblings Clyde, John, Edwin and Betty. Maxine and her husband, Victor, lived in Fortville, IN for nearly four decades. After Vick’s retirement from international Harvester, they moved to Owen County where they developed and operated a campground for many years. Maxine was a strong woman who not only raised a family of six children with her husband, Victor Holt, but assisted in the support of the family businesses. She loved by many people. She is survived by four children; Jerry (Attica), Greg (Spencer), Regi, (wife Kate) (Pendleton) and Vickie Maxey (Spencer). Two of her sons, Richard and Stan predeceased Maxine. She is also survived by six grandchildren; Gavin Holt (Indianapolis), Nicholas Holt (Denver CO), Kimberly Jones (husband Ronnie) (Stella, NC), Shane Holt (wife Renita)(Greenville, NC), Gabrielle Teter (Spencer), Zoe Teter (Indianapolis) and two step-granddaughters; Shelly Firsich (Martinsville) and Sherry Danielson (Greater Indianapolis area.) there are also several great-grandchildren rounding out the family. Friends and family may call on Tuesday, May 28th, 2019 from 4:00 p.m. until 7:00 pm and Whitaker Funeral Home in Cloverdale, IN and on Wednesday, May 29th, 2019 from 11:00 am to 1:00 p.m. at Erlewein Mortuary in Greenfield, IN with funeral service at 1:00 p.m. Burial will follow at Park Cemetery in Greenfield. Arrangements are being handled by Whitaker Funeral Home in Cloverdale and Erlewein Mortuary & Crematory in Greenfield.

The family of Maxine Holt created this Life Tributes page to make it easy to share your memories.

Maxine (Kirkpatrick) Holt, 96 of rural Spencer, IN passed away...