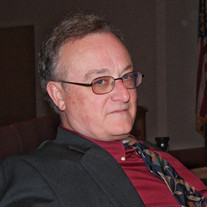 GREENFIELD - Max Albert Gordon, 71, was ushered into eternal glory on September 23, 2021, surrounded by his family. He was born on March 7, 1950, in Rushville to the late Franklin and Rosemarie Gordon. Max served in the US Army during Vietnam. Upon returning, he married Diana Kaye Manlief on June 29, 1975, and she survives. Max and Diana established their home in Shelby County, raising three children, Carrie Anne Dixon-Womack (Mike Womack) of Charlottesville, Christopher Gordon (Jennifer) of Greenfield, and Michelle Gordon (Mark Helser) of Carthage. Max loved the Lord, and was a long-time member of Arlington Christian Church. He served as both an elder and deacon, and was instrumental in establishing the church's radio broadcast program. Diana lead the puppet and drama ministry, and Max was always behind the scenes building props and running audio. After raising their kids, Max and Diana relocated to Greenfield. They became members of Park Chapel Christian Church, where Max served on the audio team for several years. By far his greatest joy was his grandkids, Ezekiel Dixon, Layla Gordon, Boaz Dixon, Addison Gordon, Hannah Womack, and Mallory Helser. Left to cherish his memory are his wife, children, grandchildren, brother Steve Gordon (Carolyn), and sister Marsha Noble (Ron). Max was preceded in death by his parents, in-laws Walter & Dorothy Manlief, brother and sister-in-law Bill & Penny Gordon, brother-in-law and sister-in-law Gary & Sue Anne Manlief, brother-in-law Stephen Manlief, and son-in-law Tony Dixon. Visitation will be held on Tuesday, September 28, 2021, from 4:00 p.m. until 7:00 p.m. at Erlewein Mortuary & Crematory, 1484 W. US Hwy. 40, Greenfield, IN 46140. A celebration of Max’s life will take place on a later date. The kids would like to thank the incredible staff at Hancock Regional and IU Health, and for friends and family that held them up in prayer during this battle. In lieu of flowers, donations may be sent to your favorite Christian organization.

GREENFIELD - Max Albert Gordon, 71, was ushered into eternal glory on September 23, 2021, surrounded by his family. He was born on March 7, 1950, in Rushville to the late Franklin and Rosemarie Gordon. Max served in the US Army during Vietnam.... View Obituary & Service Information

The family of Max Gordon created this Life Tributes page to make it easy to share your memories.