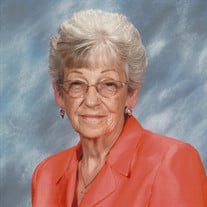 GREENFIELD – Martha “Martie” Ellen (Phares) Bauchert, age 87, lifelong resident of Hancock County, passed away Sunday, April 26, 2020 at Morristown Manor. She was born in Mohawk on August 12, 1932 to Robert Phares and Autumn (Leary) Phares. She graduated from Maxwell High School in 1950. She married Hal R. Bauchert on May 29, 1992 in Fortville. Martie was a hairdresser for much of her life and taught beauty school for many years. She also worked for General Motors and Allison Transmission for 14 ½ years before retiring in 1992. She was a member of Eden Eastern Star for over 50 years and a member of Mohawk United Methodist Church. She enjoyed sewing, flower gardening and yard work. Martie deeply cared for others and helped friends and family any way she could. Martie is survived by her sister, Rosalind Burk of Greenfield; step-children, Beverly Bauchert of Fortville, Mark (Tambra) Bauchert of Greenfield, Rex (Ramona) Bauchert of Muncie, Susan (Jim) Proper of Greenfield, and Sandra Titus (Vince Schroering) of Celestine, IN; and several step-grandchildren, step great-grandchildren, nieces and nephews. She was preceded in death by her parents, Robert Phares and Autumn Phares McNeff; son, Keith Howard Eakin; husband, Hal Bauchert; and brothers, Kenneth and Gerald E. Phares. A private graveside service will be held at New Palestine Cemetery in New Palestine. Pastor Kerry O’Brien will be officiating. In lieu of flowers, memorial contributions may be made by mail to Mohawk United Methodist Church, 2045 W. 400 N., Greenfield, IN 46140. The family also asks to please pay it forward with an act of kindness just like Martie would have done. Friends may share a memory or condolence at www.erleweinmortuary.com. Arrangements are being handled by Erlewein Mortuary & Crematory in Greenfield.

The family of Martha "Martie" Bauchert created this Life Tributes page to make it easy to share your memories.