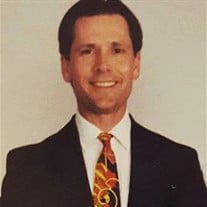 GREENFIELD – Rev. Mark S. Judy, age 61, of Greenfield, passed away Wednesday, December 20, 2017 at Hancock Regional Hospice. He was born on November 12, 1956 in Cincinnati as the son of Wesley and Gladys Wanda (Howell) Judy. He graduated from New Palestine High School in 1975. Mark received his Bachelor’s Degree from Ball State in 1980, then continued his studies at Bob Jones University, receiving his Masters of Divinity in 1987 and Doctorate of Ministry in 2004. He married Beth A. (Horton) on August 14, 1982 in Greenfield. He began his 30 years as a minister at Blessed Hope Baptist Church in Deland, FL; in April of 1996, he moved on to become a minister at Hancock Reformed Baptist Church in Greenfield. Throughout the years, Mark has been involved in the community in a multitude of ways. Mark was founder and a professor of Hancock Theological College from 2007 to present. He founded the Indianapolis Kings Baseball Team, was a founding board member of the Eastside Golden Eagles basketball club, and helped start the Reformed Society of Indiana. He was a member of FIRE (Fellowship Independent Reformed Evangelical), and taught Radio at Ben Davis High School from 1980-1982. Mark described himself as a sinner saved by the grace of God. He is survived by his father, Wesley Judy of New Palestine; wife, Beth Judy of Greenfield; sons, Greg (Brittany), Mike, Kent, Brett, and Scott Judy, all of Greenfield; brothers, Gary (Maryann) Judy of Easton, MD, Dennis (Kathryn) Judy of New Palestine, and Ron Judy of Greenfield; sister, Denise (Guy) Stricker of New Palestine; grandson, Ethan Mark; mother-in-law, Karen Horton; sister-in-law, Jama (Dave) Winiger; and many nieces and nephews. He was preceded in death by his mother, Gladys Judy; and father-in-law, Al Horton. Visitation will be held on Friday, December 22, 2017, from 4:00 p.m. until 8:00 p.m. at Erlewein Mortuary & Crematory, 1484 W. US Hwy. 40, Greenfield, IN 46140. A funeral service will be held on Saturday, December 23, 2017 at 11:00 a.m. at Hancock Reformed Baptist Church, 944 E Davis Rd, Greenfield, IN 46140. Rev. Dennis Judy will be officiating. Burial will follow Tuesday, December 26, 2017 at 11:00 a.m. at Park Cemetery in Greenfield. Guests should meet at the mortuary at 10:30 a.m. for procession to Park Cemetery. In lieu of flowers, memorial contributions may be made by mail to the Hancock Reformed Baptist Church, 944 E Davis Rd, Greenfield, IN 46140, or envelopes will be available at the mortuary and church. Friends may share a memory or a condolence at www.erleweinmortuary.com.

GREENFIELD &#8211; Rev. Mark S. Judy, age 61, of Greenfield, passed away Wednesday, December 20, 2017 at Hancock Regional Hospice. He was born on November 12, 1956 in Cincinnati as the son of Wesley and Gladys Wanda (Howell) Judy. He graduated... View Obituary & Service Information

The family of Rev. Mark S. Judy created this Life Tributes page to make it easy to share your memories.