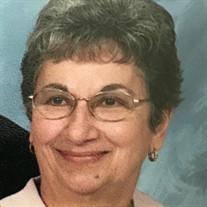 Maria (Terino) Robinson, 87, of Greenfield, passed away on Friday, February 5, 2021 at her residence surrounded by her loving family. Maria was born on November 8, 1933 in White River Junction, Vermont; the daughter of Clement and Amelia (Guarino) Terino. Maria met and married her lifelong love, Earl Robinson on November 21, 1954 in White River Junction, Vermont, and relocated to Greenfield, in 1955. Maria was a member of St. Michael’s Catholic Church where she served for many years with the Ladies Club and the bereavement committee, and was known for her pineapple upside down cake. The greatest venture Maria pursued was being the matriarch of her beloved family. She stayed active and current with the lives of her children, and grandchildren all of her life. Her grandchildren could always count on her attending and supporting their special moments. Aside from her family, Maria’s favorite thing in life was utilizing her gifted skills in the kitchen. She enjoyed baking and cooking; and was known for her famous spaghetti and meatballs. Maria had a green thumb, and tended to a large garden alongside her husband for many years and later canned the vegetables they grew together. She entertained herself with crossword puzzles, walking along the Pennsy Trail, reading a good book, and even watching a little Homicide Hunter. In addition, Maria also enjoyed spending time bowling, fishing, and traveling to see her extended family. Maria is survived by her husband of 66 years, Earl Robinson; children, David Robinson (Kathy A.), Robert “Bobby” Robinson (Tammy Maynard), Jerry Robinson, and Ann Marie Sandefur (Pat); daughter-in-law, Kathy L. Robinson; grandchildren, James (Christin) Robinson, Angela (David) Wiant, Jennifer Robinson, Jeffrey (Sunny) Robinson, Amanda Robinson (Dakota Hawkins), Kellen Robinson, Jenna Sandefur, and Jase Sandefur; and eight great-grandchildren. She was preceded in death by her parents; son, Douglas “Dugger” Robinson; and brothers, Armand Terino, Jerry Terino, and Raffaele Terino. A Mass of Christian Burial will be held at 11:00 a.m. on Saturday, February 13, 2021 at St. Michael’s Catholic Church, 519 Jefferson Blvd, Greenfield with Father Aaron Jenkins officiating. Burial will follow at Park Cemetery. Visitation will be held from 4:00 p.m. to 7:00 p.m. on Friday, February 12, 2021 with a Rosary Service held at 4:00 p.m. at Erlewein Mortuary, 1484 W. US 40. In lieu of flowers, memorial contributions may be made in Maria’s memory to St. Michael’s Flower Fund. Friends may share a memory or condolence at www.erleweinmortuary.com.

Maria (Terino) Robinson, 87, of Greenfield, passed away on Friday, February 5, 2021 at her residence surrounded by her loving family. Maria was born on November 8, 1933 in White River Junction, Vermont; the daughter of Clement and Amelia (Guarino)... View Obituary & Service Information

The family of Maria Robinson created this Life Tributes page to make it easy to share your memories.

Maria (Terino) Robinson, 87, of Greenfield, passed away on Friday,...