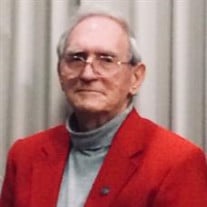 GREENFIELD - Louis Raymond Faenzi, Sr., passed away to be with the Lord on January 8, 2019. Born and raised in Indianapolis, Indiana, Lou joined the service shortly after graduating Howe High School and working as a machinist with General Motors – Allison Division. He was a veteran of the U.S. Air Force (Scott AFB and McClellan AFB; 11th Command), and while stationed in England he would wed his wife Margaret (Greta) McCunn McIntyre on June 26, 1954. Upon return to North America and an honorable discharge from the Air Force, he joined his brother Alex to pursue and co-own Faenzi’s TV and Repair. In 1968, he would move the family from Indianapolis to Greenfield to begin his own business known today as LRF Electronics. One of his greatest joys and deepest pleasures was raising his seven children. He took great pride in serving as a Boy Scout Leader for Troup 770 and attending events and activities involving his children, grandchildren, and great grandchildren. While raising his children to love and care for animals, he was very active in the American Kennel Club and the Irish Setter Fanciers of Indianapolis, serving as a sporting group judge. During his life he served in three Catholic churches, St. Francis de Sales (Indianapolis), St. Michaels (Greenfield), and St. Thomas (Fortville). He was a man of the community and, in particular, was devoted to the small businesses within Greenfield. He served on the Greater Greenfield Chamber of Commerce, receiving recognition for his outstanding service. In 2012, he was inducted into the Brandywine USBC (bowling) Hall of Fame. He served on multiple merchant committees and volunteered with the Hancock County 4-H obedience. Among his favorite activities were bowling on leagues with family and friends and viewing or attending any game involving the Indianapolis Colts and Pacers. He was humbled when Chuck Strong sent him care packages while he was receiving healthcare treatment. Lou was known as a man of integrity, honor, and compassion. He was absolutely committed to making his community (our community) a better place for future generations. He will be dearly missed by all who knew and loved him. He was preceded in death by his wife, Greta, of 59 years and his parents Otto and Olga (Giovannoni) Faenzi, and brother, Alex. Surviving are his children Louise (Joe) Fiano, Linda Streit, Bob (Kathy) Faenzi, Debbie (Greg) Muegge, Louis, James (Dawn), and Amy (Joe) Fistrovich. He is also survived by his siblings Mary (Bill) Whalen, George (Sheila) Faenzi, and Joan (Bob) Wilson. He is also survived by 17 grandchildren and 21 great grandchildren, and many more loving family and friends. Visitation: 4-8 p.m., January 11 at Erlewein Mortuary, Greenfield location. Mass of Christian Burial: 11 a.m., January 12 at St. Michael’s Catholic Church, Greenfield. Burial: Park Cemetery. In lieu of flowers, a memorial contribution can be sent for youth scholarships at Strike Force Lanes Youth Bowling PO Box 812 Greenfield, IN 46140 or Hancock Co. 4-H Dog Obedience in c/o Jan Cochard 6475 N 200 W, Greenfield, IN 46140. Friends may share a memory or send a condolence at www.erleweinmortuary.com or email condolences to [email protected]

GREENFIELD - Louis Raymond Faenzi, Sr., passed away to be with the Lord on January 8, 2019. Born and raised in Indianapolis, Indiana, Lou joined the service shortly after graduating Howe High School and working as a machinist with General Motors... View Obituary & Service Information

The family of Louis R. Faenzi Sr. created this Life Tributes page to make it easy to share your memories.

GREENFIELD - Louis Raymond Faenzi, Sr., passed away to be with...