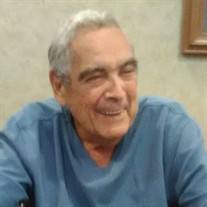 MORRISTOWN – Lloyd James Hart, age 84, of Morristown, passed away peacefully at his home on April 8, 2020 after an extended illness. Lloyd was born on August 19, 1935 to the late Ralph and Treva (Ray) Hart in Bedford, Indiana. A Korean War veteran, Lloyd joined the Navy after high school, serving on the aircraft carrier USS Oriskany (Mighty O). After his service to our Country, Lloyd married his wife, Lois (Redden). They were happily married for 62 years, she survives. Together, they enjoyed a wonderful trip to Hawaii to celebrate their 50th anniversary. Several years ago, Lloyd and Lois had the opportunity to join their sons on a trip of a lifetime to Alaska. He still talked about that trip! He retired from General Motors after 35 years of service. Lloyd was affectionately known as Grandpa to his grand kids and became known as “Grandpa Boo” to his great-grandchildren. Lloyd enjoyed being with his family. He was a member of UAW Truck & Bus and VFW Morristown. In his younger years, he loved to fish, hunt and garden. He continued growing vegetables and flowers up until his death. Besides his wife Lois, surviving is a brother, Ralph (Anne) of Connersville and a sister, Beverly Pepper of Carmel. Lloyd is also survived by his four sons, Marc (Nanette), Robin (Paula), Chris (Diana), and Don (Lynn), nine grandchildren and 22 great-grandchildren. Lloyd was preceded in death by his parents; brother, Jack Hart; and sister Carol Hadler. Private services will be held for the family. Burial will take place at Asbury Cemetery in Morristown. Due to the current pandemic, a celebration of life and full military rites by the Navy will be held at a later date. In lieu of flowers, memorial contributions may be made by mail to the American Diabetes Association, P.O. Box 15829, Arlington, VA 22215 or the Morristown Christian Church, 209 S Washington St, Morristown, Indiana 46161. Friends may share a memory or condolence at www.erleweinmortuary.com. Arrangements are being handled by Erlewein Mortuary & Crematory in Greenfield.

MORRISTOWN &#8211; Lloyd James Hart, age 84, of Morristown, passed away peacefully at his home on April 8, 2020 after an extended illness. Lloyd was born on August 19, 1935 to the late Ralph and Treva (Ray) Hart in Bedford, Indiana. A Korean... View Obituary & Service Information

The family of Lloyd J. Hart created this Life Tributes page to make it easy to share your memories.