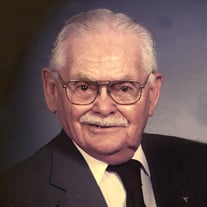 MORRISTOWN – Leroy P. Six, age 92, of Morristown, passed away on Monday, July 16, 2018 at Morristown Manor. He was born on May 4, 1926 in Arlington, IN as the son of Raymond and Nettie G. (Nelson) Six. He served as a Corporal in the U.S. Army during World War II. Leroy married Elma Mae (Talbert) on June 9, 1978 in Rush County. He was a greeter at Walmart for over 20 years in Greenfield. He also worked for Sears in the auto service department in Shelbyville and Indianapolis and was a serviceman for many years at Runyon Tires in Morristown. Leroy was a member of Little Blue River Friends Church. He loved to collect toy tractors. Leroy is survived by his step-daughters, Karla (Dewey) Erwin of Indianapolis and Lorna Hanson of Morristown; many nieces and nephews, Sharon Turner, Alice Duerigen, Judy Baker, Joseph, Henry, George, and Harlan Burris; 7 step-grandchildren; and 17 step-great-grandchildren. He was preceded in death by his parents; wife; step-daughter, Nancy Haltom; step-son-in-law, Bob Hanson; sister, Opal Burris; two brothers, Marion Six and Omer Six. Visitation will be held on Monday, July 23, 2018, from 11:00 a.m. until 1:00 p.m. at Erlewein Mortuary & Crematory, 1484 W. US Hwy. 40, Greenfield, IN 46140. A funeral service will take place immediately following the visitation at 1:00 p.m. Pastor Jonathan Manship will be officiating. Burial will follow at Arlington East Hill Cemetery in Arlington, IN with military rites provided. Memorial contributions may be made by mail to the Hancock Regional Hospital Foundation, Attn: Hospice, 801 N. State Street, Greenfield, IN 46140 or Little Blue River Friends Church, 5939 County Rd 1000 W, Morristown, IN 46161. Envelopes will be available at the mortuary. Friends may share a memory or a condolence at www.erleweinmortuary.com.

The family of Leroy P. Six created this Life Tributes page to make it easy to share your memories.