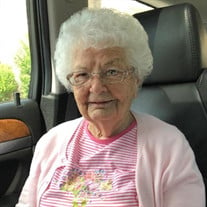 GREENFIELD - Lena Merle (Elliott) Strahl, 96, of Greenfield, died on Sunday, November 7, 2021. She was born on January 8, 1925, in Orange County to Lewis Elliott and Ola (Roney) Elliott. She had three brothers, Walter Elliott, Charles Elliott, and Harry Elliott, and two sisters, Martha (Elliott) Murphy and Mary (Elliott) Blue. Lena married Virgle Earl Strahl on July 22, 1942. During World War II she supported the war effort as a real-life Rosie the Riveter by working in a munitions factory while he served on the European front. They had six sons and one daughter. Their son Jackie died as an infant in 1955, and their son Robert died in 2019. She is survived and will be greatly missed by her children and their spouses, Allen and Linda Strahl, Donald and Debbie Strahl, Dennis and Sandy Strahl, David Strahl, Donna Sue and Bill Langley and Robert’s widow Jean Strahl. She was an affectionate grandmother to her twenty grandchildren and her many great-grandchildren and great-great grandchildren. Lena raised her children on a farm, drove the tractor as needed, and still found time to be a professional seamstress for thirty years. After retirement, she lovingly crafted handmade quilts for each of her children and grandchildren. She was a joyful spirit who knew how to have fun. She enjoyed playing Euchre, and she never lived down stories about the time she secretly threw peanuts at everyone during a large family celebration in a restaurant. Lena goes to join her husband of sixty-two years, her parents, her siblings, her sons Jackie and Robert, her daughters-in-law Mary Strahl and Dorothy Strahl, grandson-in-law Chuck Rutledge, and her great grandson-in-law Jonathan Grosskopf. The calling will be on Friday, November 12th, from 10:00 a.m. to 1:00 p.m. at Erlewein Mortuary & Crematory, 1484 W. US Hwy. 40, Greenfield, IN 46140 with a service immediately following. Burial at Park Cemetery. In lieu of flowers, please consider donating to Suburban Hospice, Inc. at 801 North State Street, Greenfield 46140. Friends may share a memory or condolence at www.erleweinmortuary.com.

The family of Lena Strahl created this Life Tributes page to make it easy to share your memories.