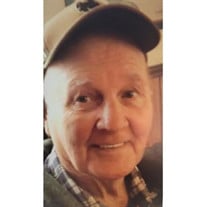 FORTVILLE, IN – LeMoine Coombs, age 85, of Fortville, passed away Thursday, January 20, 2022 at his residence with family around him after a short battle with a medical condition. He was born in Indianapolis on August 26, 1936 to Jessie and Blanche (Shull) Coombs of Fortville. He graduated from Fortville High School in 1954 and attended Butler University. LeMoine loved basketball and looked forward to high school reunions with teammates and classmates. He held the single season scoring record for decades. He married Judy (Shaw) Coombs and the two have been happily married for 45 years. Lee retired from Western Electric after 27 years of service. He always told humorous stories about his lifelong friends from Western. LeMoine farmed south of Fortville for 75 years on land homesteaded by family in 1820. Along with grain farming, he enjoyed raising livestock and dairy, milking 9 cows by hand for 20 years. He always missed his beloved dogs, Tag and ShyShy. In his free time, he enjoyed playing cards with old friends. LeMoine is survived by his wife of 45 years, Judy (Shaw) Coombs; children, Leslie Fisher, Mick Coombs, Terry Coombs, Sindi Coombs, Coleen (Steve) Richman, Amy (Rick) Mays, Scott (Jenny) Smith, and Robin (Bruce) Levy; 17 grandchildren; and 19 great-grandchildren; and his beloved poodle, Fluffy. He was preceded in death by his parents, Jessie and Blanche Coombs; first cousin, Rick Combs; and extended family, including, Cushman’s, Shull’s, Clements’. Visitation will be held on Tuesday, January 25, 2022, from 1:00 p.m. until 4:00 p.m. at Erlewein Mortuary & Crematory, 1484 W. US Hwy. 40, Greenfield, IN 46140. A funeral service will take place at 4:00 p.m. Friends may share a memory or condolence at www.erleweinmortuary.com.

FORTVILLE, IN &#8211; LeMoine Coombs, age 85, of Fortville, passed away Thursday, January 20, 2022 at his residence with family around him after a short battle with a medical condition. He was born in Indianapolis on August 26, 1936 to Jessie... View Obituary & Service Information

The family of LeMoine Coombs created this Life Tributes page to make it easy to share your memories.