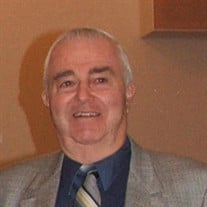 GREENFIELD – Lee Robert Towle, age 87, of Greenfield, passed away Wednesday, June 22, 2022 at his home. He was born in Pittsburgh, New Hampshire on August 15, 1934 to Mildred (Manseau) and King Towle. He graduated from Pittsburgh High School and later graduated from Francis Asbury Bible College. Lee served in the United States Army from 1956 to 1959. On June 25, 1960, he married Bette Drummond in Pittsburgh. He worked as an independent contractor and owned Lee Towle Construction for many years. Lee was a member at Church of the Bible Covenant. In his free time, he enjoyed hunting, fishing, woodworking in his shop, and spending time with his family. Lee is survived by his sons, Brett (Christy) Towle of Greenfield, Derek (Lana) Towle of Greenfield, and Nathan (Stephanie) Towle of Fishers; son-in-law, Jay Jackson; 11 grandchildren, 2 great-grandchildren; and brother, Gene Towle of Long Beach, California. He was preceded in death by his parents, Mildred and King Towle; wife, Bette Towle; daughter, Leanne Jackson; and sister and brother-in-law, Brenda and Forrest Rowe. Visitation will be held on Tuesday, June 28, 2022, from 2:00 p.m. until 4:00 p.m. at Erlewein Mortuary & Crematory, 1484 W. US Hwy. 40, Greenfield, IN 46140. A funeral service will begin at 4:00 p.m. Military honors will be rendered by the Greenfield Veterans Honor Guard and the United States Army. In lieu of flowers, memorial contributions may be made by mail to the American Cancer Society, 5635 W 96th St Suite 100, Indianapolis, IN 46278, or envelopes will be available at the mortuary. Friends may share a memory or condolence at www.erleweinmortuary.com.

GREENFIELD &#8211; Lee Robert Towle, age 87, of Greenfield, passed away Wednesday, June 22, 2022 at his home. He was born in Pittsburgh, New Hampshire on August 15, 1934 to Mildred (Manseau) and King Towle. He graduated from Pittsburgh High... View Obituary & Service Information

The family of Lee Towle created this Life Tributes page to make it easy to share your memories.