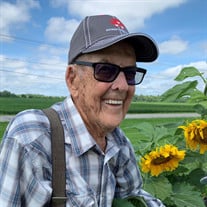 GREENFIELD – Laurel Malcom Hardisty, age 95, of Greenfield, Indiana passed away on Thursday, November 11, 2021, at Hancock Regional Hospital. He was born in Sylvania, Indiana in Greene County, on April 18, 1926, to Festus Bryan and Alta Hermoine (Quimby) Hardisty. He was a 1944 graduate of Solsberry High School and a sergeant of the U.S. Army, having served in the 100th Infantry Division in Europe during World War II. He married Marjorie Ann (Weaver) on May 26, 1948, in Linton, Indiana. Laurel was a life-long grain and livestock farmer in Greene and Hancock Counties. In addition, he served as a supervisor on the Hancock County Soil and Water Conservation District Board. He was an original co-owner of Hancock County Tractor & Implement Massey Ferguson Dealership in Greenfield, and he also assembled some of their new machinery. He was a Pioneer Seed Corn grower, and he raised and delivered genetic breeding hogs for Kleen-Leen. Laurel is survived by his wife, Marjorie Hardisty; daughters, Sue Ann Nigh (Stephen) and Jane Ellen Hardisty; and several nieces and nephews. He was preceded in death by his parents, Festus and Hermoine Hardisty; brother, Lloyd Enlow Hardisty; sister, Edna Louise Carmichael; and grandson, Brett Andrew Nigh. He was an accomplished woodworker and carpenter. This talent started when he returned from his military service and began working with his father building houses and barns. Later, Laurel had his own portable sawmill and complete woodworking shop and established the “Country Woodshop” where he made mini-barns, furniture, and several other items. When he wasn’t working his farm or woodworking, he spent time gardening and cutting grass. Awards and recognitions included Indiana Prairie Farmer 2000 Master Farmer Conservationist, 50+ year member of Indiana Farm Bureau, 70-year member of the American Legion Post #450, and member of Disciples of Christ Christian Church. Visitation will be held on Tuesday, November 16, 2021, from 3:00 pm until 7:00 pm at Erlewein Mortuary and Crematory, 1484 West U.S. Hwy. 40, Greenfield, IN 46140. A funeral service will be held on Thursday, November 18, 2021, at 1:00 pm at Solsberry United Methodist Church, 10067 E Wilkerson Dr, Solsberry, IN 47459, with one hour of viewing prior to the service. Pastor Mathew Whitacre will be officiating. Burial will follow at Solsberry Cemetery with military honors. In lieu of flowers, memorial contributions may be made to Ronald McDonald House Charities of Central Indiana, 435 Limestone St, Indianapolis, IN 46229 or Ball State University Foundation, Soil & Water Conservation Fund, 2800 W. Bethel Ave, Muncie, IN 47304. Envelopes will be available at the mortuary. Friends may share a memory or condolence at www.erleweinmortuary.com.

The family of Laurel Hardisty created this Life Tributes page to make it easy to share your memories.