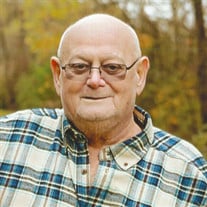 GREENFIELD – Larry Eugene Southgate, age 71, of Greenfield, passed away on Tuesday, December 4, 2018 at his residence. He was born in Indianapolis on April 25, 1947 to Frank Eugene Southgate and Violet Roberta Mathis. He graduated from Warren Central High School in 1965. Larry proudly served in the U.S. Navy on air craft carrier JFK during the Vietnam War from 1966-1970. He married Joyce Diane (Sexton) on March 22, 1969 in Indianapolis. He was a machinist for General Motors for 30 years before retiring. Larry was also a special needs bus driver for Southern Hancock for 10 years. He was a member of Cornerstone City Church in Clayton, IN, where he played lead guitar and sang. He was very passionate about music and played in a rock band. He also enjoyed fishing and hunting deer. His students would always ask “Mr. Larry” to sing songs while driving the school bus. He left a legacy for those children and they all adored him so much. Larry lived for his grandchildren and enjoyed going to their sporting events. He was a very caring and passionate guy with a huge heart and would take others under his wing. Larry is survived by his mother, Violet Mathis of Greenfield; wife, Diane Southgate of Greenfield; children, Jason (Carissa) Southgate of New Palestine and Anna Marie Southgate of Greenfield; three grandchildren, Cody Southgate, Hunter Dalton, and Dakota Southgate; brothers, Delbert and Michael; and sister, Mary. He was preceded in death by his father, Frank Southgate; and son, Brian Eugene Southgate. Visitation will be held on Sunday, December 9, 2018, from 1:00 p.m. until 5:00 p.m. at Erlewein Mortuary & Crematory, 1484 W. US Hwy. 40, Greenfield, IN 46140. A funeral service will be held on Monday, December 10, 2018, at 12:00 p.m. at the mortuary. Pastor David Clayton will be officiating. Burial will follow at Park Cemetery in Greenfield with military rites presented by the Greenfield Veterans Honor Guard. Memorial contributions may be made by mail to the American Cancer Society, P.O. Box 22718, Oklahoma City, OK 73123, March of Dimes, Donation Processing Center, P.O. Box 673667, Marietta, GA 30006 or Disabled American Veterans, 2439 West 16th Street, Indianapolis, IN 46222. Envelopes will be available at the mortuary. Friends may share a memory or a condolence at www.erleweinmortuary.com.

GREENFIELD &#8211; Larry Eugene Southgate, age 71, of Greenfield, passed away on Tuesday, December 4, 2018 at his residence. He was born in Indianapolis on April 25, 1947 to Frank Eugene Southgate and Violet Roberta Mathis. He graduated from... View Obituary & Service Information

The family of Larry Southgate created this Life Tributes page to make it easy to share your memories.