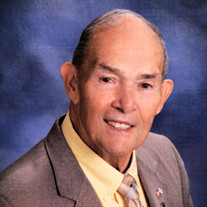 GREENFIELD – Kenneth “Ken” I. Jolly, age 78, of Greenfield, passed away Friday, August 17, 2018 at Cumberland Trace in Plainfield, Indiana. He was born on May 19, 1940 in Indianapolis as the son of Kenneth and Margaret (Linder) Jolly. He graduated from Arsenal Tech High School in 1958. Ken married Carolyn V. Jolly (Martin) on December 17, 1960 in Indianapolis. They shared 57 wonderful years together. He retired from the Indianapolis Police Department in 1987 and ran his own appliance repair business, Ken Jolly Service Company, for 50 years. Ken was a member of the Acton Masonic Lodge #720, Oakland Order of the Eastern Star Lodge #156, the Elks Lodge of Greenfield, the Indianapolis Fraternal Order of Police #86, and Bradley United Methodist Church. In his spare time he enjoyed fishing, boating, wine and beer making, and could often be found fixing anything that was broken. Ken is survived by his daughters, Virginia (Mike) Jones of La Porte, IN and Tamara (Terry Jones) Miller of Plainfield, IN; four grandchildren, Jena (Matthew) Rejak, Jamelyn (Christopher) Webb, Joshua Jones, and Sarah Miller; and four great-grandchildren. He was preceded in death by his parents and his loving wife. Visitation will be held on Wednesday, August 22, 2018, from 4:00 p.m. until 8:00 p.m. at Erlewein Mortuary & Crematory, 1484 W. US Hwy. 40, Greenfield, IN 46140. A Masonic service will take place at 7:30 p.m. A funeral service will be held on Thursday, August 23, 2018, at 10:00 a.m. at the mortuary. Pastor Charles Wilfong will be officiating. Burial will follow at McCray Cemetery in Wilkinson, IN. In lieu of flowers, memorial contributions may be made by mail to the Alzheimer’s Association or by using the link http://bndfr.com/986ck. Friends may share a memory or a condolence at www.erleweinmortuary.com.

The family of Kenneth "Ken" Jolly created this Life Tributes page to make it easy to share your memories.