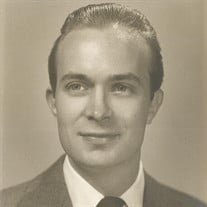 NEW PALESTINE – Kenneth M. Bayless, age 96, of New Palestine, passed away on Tuesday, January 23, 2018. He was born on October 6, 1921 as the son of Arthur and Myrtle (Wetzler) Bayless. He grew up in Irvington. His brothers were William and Harold and twin sisters Mildred and Margaret all preceding him in death. He attended School 57 and Arsenal Technical High School graduating in 1940. In 1940, after graduation from high school he received a scholarship in music at Indiana University. He attended Butler University graduating in 1948 with a bachelors in Business Administration and in 1962 with a masters in Education. In World War II he was enrolled in officers school as a radio operator and mechanic training. On February 24, 1951 he was married to Iella Laura (Ruley), who survives. He worked at Inland Container, Equitable Life Insurance and as a teacher at Arsenal Technical High School, in Adult Education Assistant Director, and Guidance Director from 1957-1986. He is a member of Burge Terrace Baptist Church and Caleb’s Kin. Kenneth loved fishing and spent many wonderful vacations in Ontario, Canada. He is the parent of three children who survive, Kenneth, Robert and Kathryn and two deceased Susan Jane and Thomas Ian. He was also the proud grandfather of Kathryn Bayless, Rachel Bayless, Sophia Taylor, Hannah Taylor and David Bayless. Visitation will be held on Friday, January 26, 2018, from 4:00 p.m. until 8:00 p.m. at Erlewein Mortuary & Crematory, 1484 W. US Hwy. 40, Greenfield, IN 46140. A funeral service will be held on Saturday, January 27, 2018, at 11:00 a.m. at the mortuary. Pastor Mark Allamon and Dr. Dwayne Felber will be officiating. Entombment will follow at Washington Park East Cemetery in Indianapolis with military rites presented by the Greenfield Veterans Honor Guards. Friends may share a memory or a condolence at www.erleweinmortuary.com.

NEW PALESTINE &#8211; Kenneth M. Bayless, age 96, of New Palestine, passed away on Tuesday, January 23, 2018. He was born on October 6, 1921 as the son of Arthur and Myrtle (Wetzler) Bayless. He grew up in Irvington. His brothers were William... View Obituary & Service Information

The family of Kenneth M. Bayless created this Life Tributes page to make it easy to share your memories.