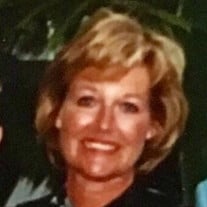 Kathryn (Butler) Burns, age 68, of Greenfield, Indiana passed away Thursday, February 11, 2021 after a hard-fought battle with ALS. Kathy was born in New Castle, Indiana on February 13, 1952 to Carl Robert Butler Jr. and Martha Lou (Gauker) Butler. She was raised surrounded by family in Dublin, Indiana and was always proud to share the fact that she had 61 first cousins. She graduated from Lincoln High School in Cambridge City, Indiana in 1970. She went on to attend Ball State University in Muncie, Indiana. Kathy was married to her husband, Tom, for over 40 years. Together they raised four wonderful children who blessed them both with four Grandchildren. As Kathy grew up, she enjoyed riding horses and working on her family farm, which is what led her to be involved in her local 4-H where she was the 4-H Queen runner up. She was very involved in her high school music program and sang in the choir. She played several instruments, including the piano and ukulele. Kathy was a top Real Estate Agent in the State of Indiana. She worked for both Century 21 and ReMax over the years until she retired in 2009. In her free time, she volunteered at Park Chapel Christian Church along with Edelweiss Horse Therapy Farm. Throughout her years, Kathy was a Girl Scout troop leader and member of the Rotary Club of Greenfield, IN. Kathy enjoyed quilting, reading, gardening, and traveling with her Husband Tom; and she loved cooking for her family and friends. After being diagnosed with ALS in 2017, in true "Kathy" spirit, she helped raise money and became involved in the ALS Association, Indiana Chapter. Most of all, she loved spending time with her family, especially her grandchildren, who lovingly referred to her as Nana. She is survived by her loving husband, Tom Burns of Greenfield, IN; daughter Alison (Drew) Carlson of Indianapolis, IN; sons, Ben Bailey of Indianapolis, IN, Brian (Jackie) Burns of Fishers, IN and Kevin Burns of Los Angeles, CA; sister Jane (Rodney) Lunsford of Westfield, IN; brother, Robert (Marlies) Butler of Urbana, OH; 4 grandchildren, Kathryn Carlson, Jack Burns, William Carlson and Brooklyn Burns; many nieces and nephews, and her devoted caregivers or “ Her Angels” as she often referred to them, Colletta Bumgarner, Dee Crawford and Earlene Chew. She was preceded in death by her parents. Visitation will be held on Thursday, February 18, 2021, from 10:00 a.m. to 12:00 p.m. at Park Chapel Christian Church in Greenfield, IN. A funeral service will follow the visitation at 12:00 p.m. Pastor David Woods and Jud Weece will be officiating. The burial will immediately follow the Funeral Service at Park Cemetery in Greenfield, IN. As a reminder, the State Mandate requires guests to wear masks when inside the Church and please practice Social Distancing. In lieu of flowers, the Burns Family is asking for Donations to be made to The ALS Association, Indiana Chapter. Donations may be mailed directly The ALS Association, Indiana Chapter (7202 E. 87th Street, Suite 102, Indianapolis, IN 46256) or made online at webin.alsa.org Arrangements are being handled by Erlewein Mortuary & Crematory of Greenfield, Indiana.

The family of Kathryn Burns created this Life Tributes page to make it easy to share your memories.