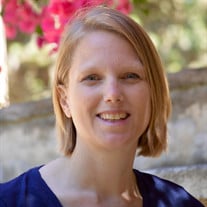 ZURICH, SWITZERLAND - Kari J. (Houston) Jones, age 38, of Zurich, Switzerland, formerly of Greenfield, passed away Saturday, March 9, 2019 due to complications of a liver transplant. She was born in Fort Wayne on May 28, 1980 to James and Carol (Schneidt) Houston. She graduated from Bellmont High School in Decatur, Indiana in 1999. Kari received her bachelor’s degree in hospitality and tourism management from Purdue University in 2003. She married Brian Jones on November 27, 2004 in Key West, Florida. Kari worked for Hyatt Hotel Corporation in the finance department since 2003. Her job allowed her to live in many places including Atlanta, Dallas, Indianapolis, Chicago and most recently Zurich. She was the co-founder of the Indiana Neuroendocrine Tumor and Carcinoid Cancer Group. Traveling, especially with her husband, was one of her greatest passions. She was fortunate to be able to visit many places all over the world, from China to Japan, India and the Middle East, and all over Europe. She also enjoyed hiking, particularly in Switzerland, and was an avid reader. She is survived by her loving husband, Brian Jones of Zurich, Switzerland; mother, Carol Houston of Greenfield; twin brother, Courtney Houston of Greenfield; brother, Josh (Sara) Houston of Greenfield; nieces, Sydney and Jorja; nephew, Sam; parents-in-law, Edward and Linda Jones; and sister-in-law, Jessica Jones. She was preceded in death by her father, James Houston. Visitation will be held on Tuesday, April 2, from 5:00 p.m. until 8:00 p.m. at Erlewein Mortuary & Crematory, 1484 W. US Hwy. 40, Greenfield, IN 46140. A memorial mass will be held on Wednesday, April 3, at 11:00 a.m. at St. Michael Catholic Church. Father Aaron Jenkins will be officiating. In lieu of flowers, memorial contributions may be made to the Neuroendocrine Tumor Research Foundation, at netrf.org/donate or Cancer Support Community of Central Indiana at cancersupportindy.org/donate-now. Envelopes will also be available at the mortuary. Friends may share a memory or a condolence at www.erleweinmortuary.com.

ZURICH, SWITZERLAND - Kari J. (Houston) Jones, age 38, of Zurich, Switzerland, formerly of Greenfield, passed away Saturday, March 9, 2019 due to complications of a liver transplant. She was born in Fort Wayne on May 28, 1980 to James and Carol... View Obituary & Service Information

The family of Kari J. Jones created this Life Tributes page to make it easy to share your memories.