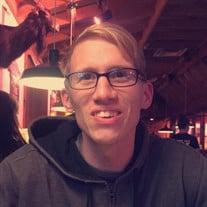 GREENFIELD – Justin Wayne Higham, age 22, of Greenfield, passed away Friday, July 17, 2020. He was born in Greenfield on October 9, 1997 to Roger and Cathy (Wagner) Higham. He graduated from New Palestine High School in 2016. Justin served four years in the United States Marine Corps. He married Savannah (Mason) Higham on May 27, 2019 in Fortville. Justin enjoyed working on his truck, being outdoors and spending time with his family. He is survived by his parents, Roger and Cathy Higham; wife, Savannah Higham; children, Ethan and RaeLynn Higham; sister, Jessica Higham; grandparents, Gilbert and Lois Wagner; mother and father-in-law, Vickie and Brad Parker and several cousins, aunts and uncles. He was preceded in death by his grandparents, Evelyn Higham and Carroll Higham; great-grandparents, Luther and Margaret Spangler and aunt, Christine (Wagner) Taylor. Visitation will be held on Thursday, July 23, 2020, from 11:00 a.m. until 3:00 p.m. at Erlewein Mortuary & Crematory, 1484 W. US Hwy. 40, Greenfield, IN 46140. A funeral service will follow the visitation at 3 p.m. Pastor Chris Dourson will be officiating. In lieu of flowers, memorial contributions may be made by mail to Active Heroes, 5809 Bardstown Road, Louisville, KY 40291 or envelopes will be available at the mortuary. Friends may share a memory or condolence at www.erleweinmortuary.com.

The family of Justin Higham created this Life Tributes page to make it easy to share your memories.