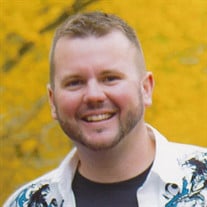 GREENFIELD – Josh Martin, age 33, of Greenfield, passed away on Wednesday, May 15, 2019. He was born in Greenfield on March 29, 1986 to David Bruce Martin and Shelly Jo (Freeman) Bailey. He graduated from Knightstown High School in 2004. He graduated from Purdue University in 2009 with a double major in Agribusiness Management and Entrepreneurship. Josh married Kristen Martin on February 20, 2010 in Greenfield. He was a 3rd generation farmer that grew-up on a large family farm in Knightstown. Josh was a founding partner of Crazy Horse Hops in Knightstown and owner of Martin Seed Service in Knightstown. While at Purdue he was a member of the fraternity Alpha Gamma Rho. Josh enjoyed hunting, farming, ATVs and was an avid outdoorsman. He was a fan of the Cincinnati Reds and Indianapolis Colts. Josh was recognized as the honorary 12th man during one of the Indianapolis Colts games. He cherished hunting trips to Kansas with his dad. Josh most of all loved being a daddy to each one of his boys. Josh is survived by his wife, Kristen Martin of Greenfield; sons, Dylan, Hunter, and Gatlin Martin all of Greenfield; mother and step-father, Shelly and Steve Bailey of Greenfield; father and step-mother, David and Keriann Martin of Knightstown sister, Stephanie (John) Tice of Carthage; grandparents, Carl (Judy) Martin of Knightstown and Tom (Arlene) Freeman of Morristown; and several aunts, uncles, cousins, and nieces. He was preceded in death by his “Grams”, Carolyn Freeman. Visitation will be held on Monday, May 20, 2019, from 2:00 p.m. until 8:00 p.m. at Erlewein Mortuary & Crematory, 1484 W. US Hwy. 40, Greenfield, IN 46140. A funeral service will be held on Tuesday, May 21, 2019, at 11:00 a.m. at the mortuary. Pastor Matt Wickman will be officiating. Following the funeral service, a procession will be held past Crazy Horse Hops with a reception to follow at that location. Memorial contributions may be made by mail to the Martin Boys Scholarship Fund, (checks payable to Kristen Martin), c/o Erlewein Mortuary, 1484 W. US Hwy. 40, Greenfield, IN 46140. Envelopes will be available at the mortuary. Friends may share a memory or a condolence at www.erleweinmortuary.com.

The family of Josh Martin created this Life Tributes page to make it easy to share your memories.