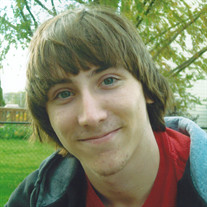 INDIANAPOLIS - Joseph Russel Richards, age 24, of Indianapolis, passed away Wednesday, February 27, 2019 at Community East Hospital. He was born in Indianapolis on July 1, 1994 to Donald “Pete” Russel Richards and Sarah “Sally” (Hauser) Richards. He graduated from Triton Central High School in 2013 and attended IUPUI for two years. He worked as a Deliveryman for UPS in Indianapolis and as a Fueler/De-icer for the Indianapolis Airport. He was also a member of Cross of Grace Lutheran Church in New Palestine. Joseph loved his family, especially his children, nieces, and nephews. He was known for his humor and giving back to others. Joe was also an organ donor, which has benefitted multiple recipients. He was also a musician. He liked playing guitar and drums, composing songs, drawing, and going to sporting events. He is survived by his parents, Pete and Sally Richards of Indianapolis; sons, Adrian Richards of Indianapolis and Ashton Schriber Richards of Indianapolis; girlfriend, Krissy Schriber of Indianapolis; grandmother, Verda Richards of Mifflinburg, PA; siblings, Kristi Lynn (Phil) Mitchell of Woodbridge, VA and Brian Russel (Heather) Richards of Indianapolis; three nieces and three nephews, Taylor, Ava, Keegan, Tyler, Andrew, and Ashlynn; and numerous aunts, uncles, cousins, and friends. He is preceded in death by his grandmother, Sallie Hauser and grandfather, Donald Gene Richards. A Memorial Gathering will take place on Saturday, March 9, 2019, from 10:00 a.m. until 12:00 p.m. at Cross of Grace Lutheran Church, 3519 S 600 W., New Palestine, IN 46163. A Celebration of Joseph’s life will take place immediately following the gathering at 12:00 p.m. Pastor Mark Havel will be officiating. Inurnment will follow at Cross of Grace Lutheran Church Columbarium. In lieu of flowers, memorial contributions may be made by mail to the Mental Health Partners of Hancock County, Suite 204, 98 E. North Street, Greenfield, IN 46140, or the Indiana Counselor’s Association on Alcohol and Drug Abuse, 1441 N. Delaware Street, Indianapolis, IN 46202, or envelopes will be available at the church. Friends may share a memory or a condolence at www.erleweinmortuary.com.

The family of Joseph Russel Richards created this Life Tributes page to make it easy to share your memories.