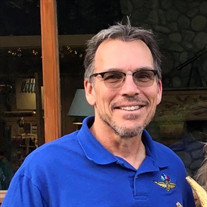 GREENFIELD – John Brian Wagner, age 62, of Greenfield, passed away on Thursday, October 21, 2021 after a valiant battle with Diffuse Large B Cell Lymphoma. He was born in Wausau, Wisconsin on March 21, 1959 to Gordon Lambert and Loretta Grace (Steffen) Wagner. John met his wife Elizabeth “Liz” (Valentour) while attending Lisle Senior High School in Lisle, graduating in 1977. He and Liz were married August 1, 1980 in Naperville, Illinois. Working his way through school, John received his bachelor’s degree in mechanical engineering from the University of Illinois - Chicago in 1981. John began his career as an engineer with Chicago Rawhide (CR Industries), Elgin, Illinois. He later transitioned to Freudenberg-NOK in Morristown, Indiana where he spent more than 30 years as a Project Engineer. During his time at Freudenberg-NOK he developed several patents. He enjoyed solving product design challenges at work and finding the key to solving a customer’s dilemma. John always said, “If you love what you do, you never work a day in your life.” John’s passion and commitment were evident in all areas of his life. He loved helping others. As a member of Brookville Road Community Church John was involved in the jail ministries for youth, and a regular “barista” making coffee for church services. He loved coaching and cheering on his children and grandchildren in their many sporting activities. He too was an avid sportsman, running, swimming and biking. He also spent many years on the sidelines at New Palestine High School football field as a Chain Gang member. John also enjoyed gardening, woodworking, and of course designing and making things for the house and family. You could always count on John’s optimism and indomitable spirit. John is survived by his father Gordon Wagner of Greenfield, loving wife of 41 years Liz Wagner of Greenfield; children Heather Meyer of New Palestine, Angela (Brian) Wagner-Gilbert of Greenfield, Jordan Wagner of Beech Grove, and Brian (Keelie Baker) Wagner of New Palestine; grandchildren, Amadeus, Ezra, Madison, June, Archer and Chloe; siblings Jim (Jeri) Wagner of Kingwood Texas, Joni (Joel) Stackman of Greenfield, Tom (Dawn) Wagner of New Palestine; and many nieces and nephews scattered around the U.S. He was preceded by his mother, Loretta Wagner, father and mother-in-law, Jack and June Valentour. Visitation will be held on Monday, October 25, 2021, from 4:00pm until 8:00pm at Erlewein Mortuary and Crematory, 1484 W US Hwy 40 Greenfield, IN 46140. The funeral service will be held on Tuesday, October 26, 2021, at 11:00 a.m. at the mortuary. Pastor Andy Flink will be officiating. Burial will follow at New Palestine Cemetery in New Palestine. The family would like to thank the Heart to Heart Hospice, Community North Cancer Center, and St. Francis BMT Center for all the loving care provided to John. In lieu of flowers, memorial contributions may be made by mail to Leukemia & Lymphoma Society, PO Box 98018, Washington DC 20090 or envelopes will be available at the mortuary. Friends may share a memory or condolence at www.erleweinmortuary.com.

GREENFIELD &#8211; John Brian Wagner, age 62, of Greenfield, passed away on Thursday, October 21, 2021 after a valiant battle with Diffuse Large B Cell Lymphoma. He was born in Wausau, Wisconsin on March 21, 1959 to Gordon Lambert and Loretta... View Obituary & Service Information

The family of John Brian Wagner created this Life Tributes page to make it easy to share your memories.