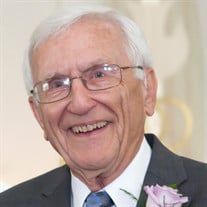 College Chancellor, City Manager, WWII Vet Dies at 93 John Charles Robertson, 93, died peacefully on July 10, 2019, surrounded by his loving family. He was a beloved husband, father, brother, grandfather, uncle, friend, and professional. Raised in Birmingham, Michigan, John enlisted after high school in the Navy near the end of WWII and served as an officer on the first landing ship to deliver US occupation troops to Nagasaki, Japan. He returned in the Navy Reserve to earn bachelor and master’s degrees at the University of Michigan where he met a PhD candidate, his future wife Jeannette. The couple married in her hometown of Cannon Falls, Minnesota and followed jobs to Seattle and back to Michigan before John was appointed City Manager of Ferguson, Missouri in 1961. Four years later John was recruited to help expand the nascent St. Louis Community College system as its Vice Chancellor. He retired as the school’s Acting Chancellor in 1988 and moved to Greenfield, Indiana in 2001, where his wife passed in 2006 after battling Alzheimer’s. Seven years later he remarried to JoAn Hudson of Greenfield, who had also been widowed. John was kind, generous, funny, a gifted speaker and musician, and voracious reader. He was an avid volunteer, lending his time and talent at St. Michael School, Hancock Regional Hospital, SonRise Ministry for disabled adults; he founded the Hancock County Library Storytelling Guild, and sang in his church choir. He was a member of the Indiana Storytelling Arts and Cross of Grace Lutheran Church. John is remembered warmly by his second wife, JoAn (and her children and grandchildren), his brothers Richard (Linda) and William (Beverly), his children Kristin (Adam Gordon) of Colleyville, Texas, Carol Robertson-Plouch (David Plouch) of Greenfield, Leigh (Erin) of Algonquin, Illinois, and Kirk (Lisa) of McLean, Virginia, nine grandchildren, and friends and family across the country. He was pre-deceased by his first wife, Jeannette. Visitation (Friday, August 9, 4pm-7pm and August 10, 10am-11am) and Memorial Service (Saturday, August 10, 11am) will both be held at Cross of Grace Lutheran Church, 3519 S. 600 W, New Palestine, IN. In lieu of flowers, memorial donations in John’s name can be made to: the Hancock Regional Hospital Foundation, Rex A. Pasko Hospice Endowment https://www.hancockregionalhospital.org/hrhdonations; to Cross of Grace Church, www.crossofgrace.org/give, or to the Hancock County Public Library Storytelling Guild. For more information: www.erleweinmortuary.com

The family of John C. Robertson created this Life Tributes page to make it easy to share your memories.